IND vs ENG 4th Test 2021: Nasser Hussain Wants Ravichandran Ashwin To Play at the Oval in Place of Ishant Sharma

Ashwin is currently the highest Test wicket-taker in the Indian team with 413 scalps in 79 games. He is also the fourth-highest Test wicket taker for India, only four wickets behind third-placed Harbhajan Singh. 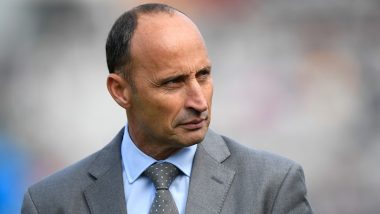 New Delhi, Sep 1:  Former England captain Nasser Hussain has said that 'World No. 2 spinner' Ravichandran Ashwin should have played in Headingley and that he must play at The Oval in the fourth Test, starting September 2. A number of former players have advocated for Ashwin's inclusion in the playing XI as he is yet to play in India's five-Test series.

"What India do have is an off-spin bowler ranked No. 2 in the world and a batsman good enough to have made five Test centuries in Ravichandran Ashwin. He should have played at Headingley against England's five left-handers and he must play at The Oval," Hussain wrote in his column for the Daily Mail.  IND vs ENG 2021: Nasser Hussain Believes That the Last Thing England Would Do Is To Write India Off in the Fourth Test.

Ashwin is currently the highest Test wicket-taker in the Indian team with 413 scalps in 79 games. He is also the fourth-highest Test wicket taker for India, only four wickets behind third-placed Harbhajan Singh.

Additionally, Ashwin also has five Test centuries to his name, the last of which came against England in the first Test of their tour of India in his home ground in Chennai. India vs England 4th Test 2021 Preview: Likely Playing XIs, Key Battles, Head to Head and Other Things You Need to Know About IND vs ENG Cricket Match at The Oval in London.

"So, the most likely solution is that Ashwin will come in for a seamer, most likely Ishant Sharma who struggled at Headingley, and join Ravindra Jadeja in a more balanced looking side with a deeper batting line-up as long as Jadeja recovers from his knee injury," Hussain wrote.

(The above story first appeared on LatestLY on Sep 01, 2021 11:30 AM IST. For more news and updates on politics, world, sports, entertainment and lifestyle, log on to our website latestly.com).