Former Australian spinner Brad Hogg feels Virat Kohli's Royal Challengers Bangalore (RCB) are among the favourites to win the 13th edition of the India Premier League (IPL) in the UAE. 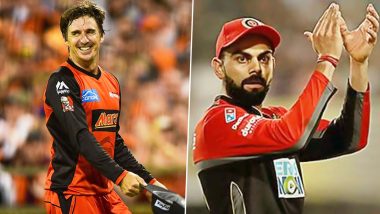 IPL chairman Brijesh Patel, on Friday, had confirmed to IANS that this year's league will be played around the September 19 to November 8 window and the same has been communicated to the franchises. IPL 2020: Suresh Raina Says ‘Dreaming When We Can Play on the Field Again’.

Following this news, Hogg took some questions from the fans regarding the cash-rich league and also spoke about his two favourite teams to lift the title in the UAE.

"They (RCB) will have a big chance to take out an IPL. They have always had good stock on paper but they have never been able to go out and get the job done," Hogg said in a video uploaded on his YouTube channel.

"Now, with the inclusion of (Aaron) Finch at the top, he will be able to dominate the powerplay overs... get some quick runs and relieve the pressure off AB de Villiers and Virat Kohli in the middle-order," Hogg opined.

"Also, their bowling attack looks strong with Dale Steyn and Kane Richardson, and they have a better team balance as compared to last couple of years. They will have a better strategy going into the tournament," he added.

Apart from RCB, Hogg believes defending champions Mumbai Indians (MI) will also be up there, challenging for the title once again. MI remains the most successful team in the history of the competition, having lifted the trophy a record four times.

The spinner also tipped all-rounder Hardik Pandya to return from injury with a bang and win the man of the tournament prize in the UAE.

"The reason is that they (MI) have got a good top-four... they also have good all-rounders and their bowling attack is stable, led by two geniuses with the new ball and in death overs -- (Jasprit) Bumrah and (Lasith) Malinga," Hogg said.

"Also, the all-rounder Hardik Pandya. He is looking to get back into cricket after a long time off due to injury. He has also got a baby on the way as well."

"I just think those things will give him extra energy and he will become man of the tournament in the UAE," he added.

(The above story first appeared on LatestLY on Jul 26, 2020 04:00 PM IST. For more news and updates on politics, world, sports, entertainment and lifestyle, log on to our website latestly.com).