IPL 2022: Glenn Maxwell Admits His Side Will Be Watching Mumbai vs Delhi Pretty Closely

After playing an all-round role in a vital eight-wicket victory for Royal Challengers Bangalore (RCB) over Gujarat Titans in IPL 2022, all-rounder Glenn Maxwell admitted that the side will be watching Saturday's match between Mumbai Indians and Delhi Capitals very closely. 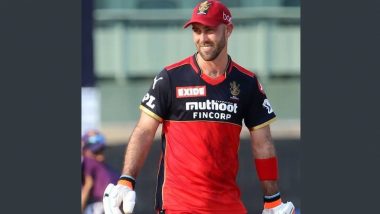 Mumbai, May 20: After playing an all-round role in a vital eight-wicket victory for Royal Challengers Bangalore (RCB) over Gujarat Titans in IPL 2022, all-rounder Glenn Maxwell admitted that the side will be watching Saturday's match between Mumbai Indians and Delhi Capitals very closely. Though Bangalore are on fourth place in the points table, their chances of sneaking in the playoffs depend totally on Delhi losing to Mumbai in the second-last league match of the tournament. RCB vs GT, IPL 2022: Matthew Wade Smashes His Bat in Anger; Found Guilty of Level 1 Offence.

"We'll be probably watching the Mumbai v Delhi game pretty closely. I wouldn't mind a round of golf (Friday). There will be a bit of rehab going on. But I think the guys will stay really focused. The amount of hard work and effort that has gone into this team this year. We feel like we deserve to be in the final four and, hopefully, Mumbai will do the right thing by us and get us into the final four," said Maxwell after the match.

It was a match where Bangalore had everything coming their way after losing the toss. Maxwell set the tone for Bangalore in power-play, completing a one-handed screamer of a catch at second slip to dismiss Shubman Gill cheaply, followed by trapping Matthew Wade lbw. "In my mind I was moving a little bit too slowly and wasn't going to get there. It just hit perfectly in the fingers and stuck nicely. I've practiced that stuff my whole life and it's not something that is just out of the blue. It's one of those things I work really hard on.

"To have it stick perfectly and it gave us a great start, we were able to control the powerplay after that. It was just about holding my length. We saw Sai (Kishore) bowled beautifully there and there was a bit of hold for the finger spin. So just trying to make the most out of anything out of the surface," stated the all-rounder. With the bat, Maxwell unleashed a flurry of boundaries in a blazing finishing show of 40 not out off just 18 balls to finish off the chase in style. "I didn't want to soak up any time. If I could get those first couple away and try to take the pressure off Virat at the other end, we can keep the momentum going. RCB vs GT, IPL 2022: Faf Du Plessis Pleased With Virat Kohli’s Return To Form; Hardik Pandya Admits to Being 10 Runs Short.

"If I got out first ball, it wouldn't have made a difference but if I soaked up a few dots, it could have given them some momentum back. Just trying to be ultra positive and obviously leave the game with no doubt because we felt like we dominated with the bat in that innings," remarked Maxwell. Just like Kohli and Faf du Plessis had luck with some streaky boundaries, Maxwell had a huge slice of luck on the very first ball he faced. Leg-spinner Rashid Khan hit the top of Maxwell's leg stump as the batter tried to swipe across the line. But the bails didn't come off and the ball rolled away for four byes.

"I didn't (see it), but when I missed it, I thought that's going to be pretty close to them. The worst thing is picking a wrong-un and missing it and thinking it's going to hit the stumps. You get those times when you need a bit of luck. Sometimes throughout this tournament it's been a bit up and down. You gotta take the good with the bad. It's like runout off the bowlers hand. Some things you can't do anything about but at least the bails stayed on for me this time," concluded Maxwell.

(The above story first appeared on LatestLY on May 20, 2022 01:06 PM IST. For more news and updates on politics, world, sports, entertainment and lifestyle, log on to our website latestly.com).