March 67 of IPL 2022 at the Wankhede Stadium saw Virat Kohli ending his lean patch with a vintage knock of 73 off 54 balls to carry Royal Challengers Bangalore to fourth place in the points table by defeating Gujarat Titans by eight wickets, and keeping their playoffs hopes alive. 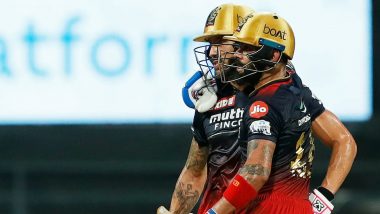 Mumbai, May 20: March 67 of IPL 2022 at the Wankhede Stadium saw Virat Kohli ending his lean patch with a vintage knock of 73 off 54 balls to carry Royal Challengers Bangalore to fourth place in the points table by defeating Gujarat Titans by eight wickets, and keeping their playoffs hopes alive. It was no surprise that Bangalore captain Faf du Plessis was pleased with Kohli being back to his best when his team needed him the most, killing the chase of 169 with a 115-run opening stand. RCB vs GT, IPL 2022: Virat Kohli Blitz Takes Bangalore to Fourth Place With 8-Wicket Win Over Gujarat.

"Throughout the season we haven't done as much as we have liked. But you still need to back these big players. Virat had been putting in the hard yards in the nets. I play the role with him and get him pumped up. He has got so much emotions and hype pulls you through. It is as if you are playing a rugby game," said du Plessis after the match. While it was jubilation for Bangalore, Gujarat huffed and puffed their way to 168, riding on captain Hardik Pandya's unbeaten 62 besides David Miller's 34 and Rashid Khan's cameo of 19 off just six balls. But the Gujarat skipper admitted that they were ten runs short of the total they would have liked to defend.

"It was just about a par score. Batting we did get 55 or 60 (50 runs) in the last five when the ball was stopping a bit but 168 we were quite happy. We wanted to give him (Ferguson) the opportunity a bit but the wicket was holding a bit where we thought the ones who could bowl slower balls or take the pace away would be a better option. We kind of got it back in the game as well but Maxwell playing the way he played, and a couple of chances there, we were 10 runs short in the end," was Pandya's assessment of the match.

Bangalore had reduced Gujarat to 62/3 in 8.3 overs with Glenn Maxwell's one-handed screamer, diving full-length to his right at slip, sending Shubman Gill back to the pavilion off Josh Hazlewood. Du Plessis himself had a moment of fielding brilliance, inflicting the run out of Wriddhiman Saha with a direct hit from mid-off. But he wished for Mumbai Indians captain Rohit Sharma to replicate what Kohli did on Thursday, against Delhi Capitals on Saturday. Virat Kohli Grateful After Match-Winning 73 Helps RCB Keep IPL 2022 Playoff Hopes Alive With Win Over Gujarat Titans (Watch Video).

"That catch (by Maxwell) was awesome. We were trying to get some wickets in the powerplay. The run-out was pretty cool as well. When I hit the stumps, I was like 'what do you say about my arm now'? I think tonight was important for obvious reasons. You always want to finish strongly. A few inconsistent performances have put us in this situation. I am banking on Rohit to come good," said du Plessis. Pandya conceded that Gujarat will have to avoid losing wickets in clusters while batting as they pack their bags for Qualifier 1 in Kolkata on May 24.

"We were on the right path. We need to look after losing back-to-back wickets which we have spoken about in the past where, in T20 cricket if you lose back-to-back wickets, it puts you back a couple of overs. The learning is that in the playoffs, we don't lose back-to-back wickets." Pandya signed off by saying that giving Matthew Wade the wicketkeeping duties was due to Saha feeling a hamstring strain. "It's always good to score runs but more than anything, the way the boys are gelling and the way things are going, for us this game was a learning. He (Saha) was feeling his hamstring was tight. So just precautionary wise, we felt it was right to have Wadey (Wade) keep."

(The above story first appeared on LatestLY on May 20, 2022 10:36 AM IST. For more news and updates on politics, world, sports, entertainment and lifestyle, log on to our website latestly.com).