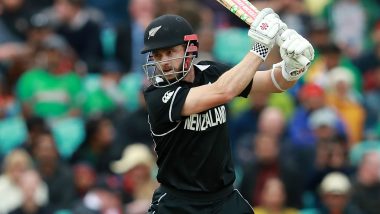 The 28-year-old hit a match-winning century – his first in CWC19 – against South Africa to lead his side to a four-wicket victory. His score of 106 from 183 deliveries, which comprised of 9 fours and a six that sealed the victory, was instrumental in helping the Black Caps to maintain their unbeaten streak in the competition. New Zealand vs West Indies Live Cricket Score 29th ODI Match.

This was also Williamson’s 13th ODI century in just 143 matches. He was involved in a record 160-run partnership with Ross Taylor (69) after Sheldon Cottrell had removed both the opening batsmen for a first-ball duck to reduce New Zealand to 7/2. Not only did Williamson alongside Taylor help in reconstructing the Kiwi innings but also has pushed them towards setting a big-target for West Indies.

New Zealand are only one of the two teams still remaining unbeaten in the 2019 cricket World Cup. They have won four of their five matches, while one game against India was abandoned due to rain. They are second in the points standings with nine points and can overtake Australia to climb to the top if they manage to defeat West Indies.

West Indies, who are in a do-or-die situation, won the toss and elected to field first. Left-arm fast bowler gave them the perfect start with a double-wicket opening over before Williamson and Taylor took control of things.

(The above story first appeared on LatestLY on Jun 22, 2019 09:02 PM IST. For more news and updates on politics, world, sports, entertainment and lifestyle, log on to our website latestly.com).