Kolkata Knight Riders would hope that recover quickly from their last-ball defeat to Chennai Super Kings and give their very best if they have to beat Delhi Capitals, who are in very good form and are just one win away from making it to the playoffs. 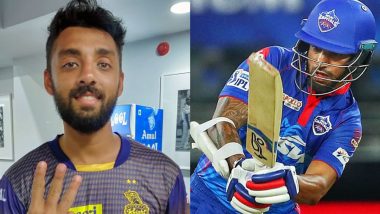 Kolkata Knight Riders would lock horns with Delhi Capitals in match 41 of IPL 2021 on Tuesday, September 28. The match would be played at the Sharjah Cricket Stadium and has a start time of 3:30 pm IST (Indian Standard Time). Delhi Capitals have maintained the form they had in the first phase of this year's competition and have been dominant in wins over Sunrisers Hyderabad and Rajasthan Royals in the UAE leg of IPL 2021 so far. They have been doing well in all aspects of the game--batting, bowling and fielding and it is not surprising that they find themselves in the second spot on the points table with one win away from securing a playoff spot.

The Knight Riders meanwhile would hope that they are able to recreate their performances against Royal Challengers Bangalore and Mumbai Indians in Abu Dhabi this season. In both these games, the two-time champions displayed a free-flowing style to their game, taking on bowlers with aggression and intent and these two wins made everyone sit up and take notice of the talent that this side possesses. After a slip-up against Chennai Super Kings, Eoin Morgan would expect his team to be at their best once again as they are taking on a top side, which is good form. KKR vs DC Preview: Likely Playing XIs, Key Battles, Head to Head and Other Things You Need To Know About VIVO IPL 2021 Match 41

Fans who make fantasy teams on Dream11 are well aware that a captain doubles the points earned while vice-captain multiplies the same x1.5 times. Let us take a look at the picks for the captain and vice-captain's slot for the KKR vs DC match:

The left-hander has been in some form this season and no wonder, he is second on the list of run-getters. Despite failing to fire against Rajasthan Royals, Dhawan looks set for a good score against Kolkata Knight Riders on Tuesday, September 28.

One of the reasons for KKR's success in the bowling department has been the performance of Varun Chakravarthy. The mystery spinner has been a vital cog in the Knights' setup and would be eager to perform once against Delhi Capitals. His consistency in picking up big wickets and also maintaining a low economy rate makes him a good choice for being the vice-captain.

(The above story first appeared on LatestLY on Sep 28, 2021 12:57 PM IST. For more news and updates on politics, world, sports, entertainment and lifestyle, log on to our website latestly.com).