List of Indian Cricket Team Captains in 2022: From Virat Kohli to KL Rahul, a Look at Players Who Captained India This Year

The Indian cricket team this year, have witnessed multiple names wear the captain's hat for different series and tours. Recently, KL Rahul was picked to lead the Indian team for their tour of Zimbabwe, which gets underway on August 18. 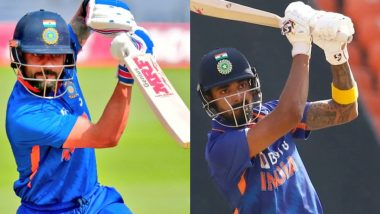 A very rare and noteworthy thing that has happened in Indian cricket this year is the naming of different players as captains for different bilateral series. The Indian team's captain hat has been swapped multiple times and if this trend continues, then fans might even lose count. Earlier this year, Virat Kohli ended his reign as Indian captain by quitting leadership of the national Test team and that made way for the BCCI to pick Rohit Sharma for the role, effectively making him the all-format skipper. IND vs ZIM, ODI 2022: KL Rahul To Lead India Against Zimbabwe, Shikhar Dhawan To Be His Deputy

But with him being injured and also the resting of senior players including him, the BCCI have kept passing around the captaincy responsibilities to multiple players this year. As a matter of fact, the Indian team have had seven different captains this year so far. The count was for the time being, stopped when a returning KL Rahul was handed the responsibility of the national team for their tour of Zimbabwe. In this article, we shall take a look at the list of players who have captained the Indian team this year.

Series that they have led India in 2022

A positive side to this is that the BCCI is preparing a leadership group within the team who can take responsibility and perform like a leader when there's a need for the same. Also, this does give fans a chance to uncover the captaincy potential in each of their favourite Indian cricket team stars, Gujarat Titans earlier this year, did a little captaincy experiment with Hardik Pandya and he went on to do a fantastic job and lead them to the IPL title in their debut season. A similar thing can also be emulated for the Indian team as well.

(The above story first appeared on LatestLY on Aug 12, 2022 10:00 AM IST. For more news and updates on politics, world, sports, entertainment and lifestyle, log on to our website latestly.com).