MS Dhoni Might Play Beyond IPL 2021, CSK CEO Says This Will Not Be the Chennai Super Kings Captain’s Last Indian Premier League Season

Dhoni has been the CSK captain since the inception of the IPL in 2008 and has led them to three titles. The franchise have also played the final a record eight times. He captained the team to a memorable title win in 2018 when CSK made their return after a two-year ban. But CSK finished sixth last season and failed to qualify for the playoffs. 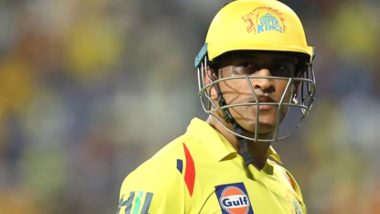 MS Dhoni might continue playing in the IPL beyond this season feels Chennai Super Kings CEO, Kasi Viswanathan. After he announced his international retirement on August 15, 2020, it was speculated IPL 13 will be Dhoni's last as a player. But the three-time IPL winning captain had confirmed that he will be playing this IPL season too. Dhoni’s response when asked by the commentator during the CSK vs PBKS match, which was the side’s last match in IPL 2020, if it was the final time he would be seen in the IPL became a national tagline. ‘Definitely not,' the CSK skipper had said replying to the question of his IPL retirement. CSK Captain MS Dhoni Could Script Three Majors Records During IPL 2021.

Dhoni, 39, is back to lead CSK in this edition of the IPL. It was thought this would be his final season in the lucrative T20 league. But the CSK CEO thinks otherwise. Asked if the franchise was looking at a suitable replacement for Dhoni, Viswanathan told the Indian Express, “I don’t think it is going to be his final year.” He also added that the franchise is not looking at any replacement for captain cool. IPL 2021: Did You Know Mumbai Indians Are Winless in Opening Games Since 2012?

Dhoni has been the CSK captain since the inception of the IPL in 2008 and has led them to three titles. The franchise have also played the final a record eight times. He captained the team to a memorable title win in 2018 when CSK made their return to the Indian Premier League after a two-year ban. They also reached the final in 2019 but were beaten by Mumbai Indians. Last season, however, CSK endured their worst ever campaign in the IPL and finished seventh after winning just six from their 14 matches in the league stage.

Last season was also the first time in the IPL history, CSK failed to reach the playoffs. Dhoni himself struggled a difficult time with the bat and scored only 200 runs in 14 matches at a strike rate of 116.28.  He will want to get back to full form this season and lead CSK to their fourth IPL title.

(The above story first appeared on LatestLY on Apr 08, 2021 07:13 PM IST. For more news and updates on politics, world, sports, entertainment and lifestyle, log on to our website latestly.com).