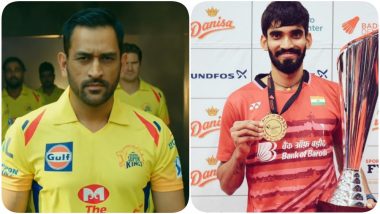 The news of IPL 2020 starting from September 19, 2020, in UAE, has surely lifted the spirits of the people in the country. With this, the fans are even excited about MS Dhoni’s long-awaited return to cricket. This also includes the Indian shuttler Kidambi Srikanth who tweeted about his happiness on social media. Like all Chennai Super KIngs's fans, he too was waiting to see the CSK captain in action again. MS Dhoni has been away from the stadium for a while now. He was last seen in Indian colours during the ICC Cricket World Cup 2019. MS Dhoni Begins Preparations for IPL 2020, Chennai Super Kings Captain Sweats it Out in the Nets (Watch Video).

Post which he has been away from cricket and has been on a sabbatical for an undisclosed period of time. His return to cricket depended on how he performed in the IPL 2020, but that too didn't happen due to the outspread of the virus. The tournament was supposed to be held in March 2020, but the pandemic caused by coronavirus had all the sporting schedules going for a toss. Now when IPL Chairman announced the dates for the IPL 13, the fans couldn't keep calm. This also included the ace shuttler. Let's check out his tweet below:

The 51-day long will be held in UAE and the BCCI has unofficially asked the franchises to leave for the cash-rich league by August 20th 2020. The BCCI will meet the franchises in the upcoming week for chalking out the further plans.

(The above story first appeared on LatestLY on Jul 25, 2020 12:55 PM IST. For more news and updates on politics, world, sports, entertainment and lifestyle, log on to our website latestly.com).