Mumbai Indians' Friendship Day Posts Will Make You Look Forward to IPL 2020, View Pics of Group Hurdles and Celebrations From Past Editions! 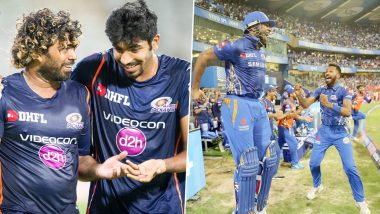 Friendship Day 2020 will be celebrated in India on August 2, 2020 (Sunday) and to mark the occasion Mumbai Indians shared photos of ‘friends who turned into family’ during their time at the IPL franchise. Players from different countries, age groups and religions have played together at the Indian Premier League side over the course of its 12-year history and have become more than a group of colleagues. Friendship Day 2020: From Virat Kohli and AB de Villiers to Rohit Sharma and Yuzvendra Chahal, Top 5 Best Friends in World Cricket.

Players who usually face each other as competitors while representing their respective countries, take the field as contemporaries when they play for Mumbai Indians. Due to this, one-time rivals have now forged friendships that will last a lifetime. To display this bond of brotherhood, the IPL side shared some photos of their cricket family. ‘To friends that became #OneFamily, Happy #FriendshipDay, Paltan’ MI captioned their post. Friendship Day 2020 Date in India: Know The Significance, History And Celebrations of the Day Dedicated to Friends.

To friends that became #OneFamily 💙

Mumbai Indians have played in the Indian Premier League in all of its 12 seasons and have won the competition four times. They have won the cash-rich league a record four times and their last IPL triumph came in 2019 when Rohit Sharma-led side defeated MS Dhoni’s CSK in the final by just a single run.

This year the competition was scheduled to take place in March 2020 but was postponed till further date due to the coronavirus pandemic. However, after the postponement of World T20 2020 and Asia Cup 2020, the cash-rich league is being planned to be held in UAE from September 19, 2020, onwards.

This will be the second time that the competition will be played in the United Arab Emirates. IPL 2014 was held in the country where each team played its first five matches there. However, an official confirmation is yet to be made and it is expected after the governing council's (GC) meeting on Sunday (August 1)

(The above story first appeared on LatestLY on Aug 02, 2020 11:13 AM IST. For more news and updates on politics, world, sports, entertainment and lifestyle, log on to our website latestly.com).