‘My Family Got Abused’: Hardik Pandya Opens Up on the Koffee With Karan Controversy 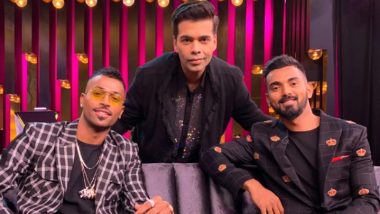 Hardik Pandya is one of the most talented cricketers in the world right now, but the all-rounder was in hot waters after his appearance on popular Indian talk show ‘Koffee With Karan’. The 26-year-old along with national team colleague KL Rahul faced a lot of backlash for their comments on the show and were subsequently dropped from the Indian team and were also handed suspensions. However, he has now opened up about the incident, saying it has made him a better person. Hardik Pandya Picks His All Time IPL XI, Not Rohit Sharma! MS Dhoni Named As Captain.

In a recent chat with cricket commentator Harsha Bhogale on Cricbuzz, Pandya admitted that he is the kind of person who accepts his mistakes. ‘When that happened, I said to myself let’s just accept it and try to correct the mistake. If I would have not accepted that mistake, that part would have still been in me. That phase does not bother me anymore because my family has accepted it,’ he said. Hardik Pandya and Natasa Stankovic Announce Pregnancy.

‘I'm a family guy. Without family, I am no one. My family is my backbone. The Hardik Pandya you're seeing right now is because of the people behind the scenes, looking after me. They make sure that I am mentally stable and I stay happy,’ he added.

Time and time again Hardik Pandya has referred to himself as a family guy and while talking about the controversy, revealed that his family facing backlash, hurt him the most. ‘My family got abused. My father gave an interview post the incident and people made a mockery of it. What hurt me the most was my action caused my family problems, and that's not acceptable,’ said the 26-year-old.

Hardik Pandya himself is now set to extend his family as the all-rounder recently announced that his fiancée Natasa Stankovic is pregnant with their first child. The 26-year-old, who hasn’t played internationally since September 2019, is expected to be back on the field once cricketing action resumes.

(The above story first appeared on LatestLY on Jun 03, 2020 02:56 PM IST. For more news and updates on politics, world, sports, entertainment and lifestyle, log on to our website latestly.com).