PBKS vs RR Preview: Likely Playing XIs, Key Battles, Head to Head and Other Things You Need To Know About VIVO IPL 2021 Match 32

A winning start to this UAE leg of the Indian Premier League 2021 is something that both these teams, who are in the middle of the points table, would aim at. A high-scoring match had followed the last time these two sides had taken on each other in the Indian leg of IPL 2021 in April. 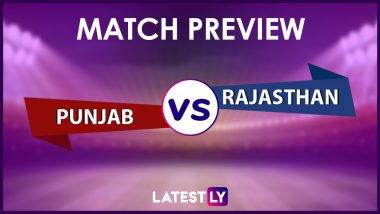 Punjab Kings begin the second phase of their IPL 2021 campaign by taking on a spirited Rajasthan Royals in the 32nd match of the competition on Tuesday, September 21. Both sides are currently level of points but Rajasthan have an advantage as they have played one match less than their opponents on Tuesday. Despite having big names like Chris Gayle, Mohammed Shami and also Nicholas Pooran, Punjab have failed to exert their dominance in the competition. They began off with a cheeky four-run win against Rajasthan Royals but have blown hot and cold ever since. KL Rahul's side have failed to capitalise on their wins and maintain any sort of momentum and on Tuesday, he would expect his side to ensure that they don't put any wrong foot against Rajasthan Royals. PBKS vs RR, Dubai Weather, Rain Forecast and Pitch Report

Sanju Samson's Rajasthan Royals too have had a similar trajectory in this IPL but with impact additions like Tabraiz Shamsi and Evin Lewis, they have sent a clear message that they aren't to be taken lightly. A win would do a world of good for both teams at this stage of the competition.

Punjab Kings and Rajasthan Royals have squared off against each other for a total number of 22 matches in the Indian Premier League. While Punjab have won 10, Rajasthan Royals hold the advantage with 12 wins to their name.

Chris Morris and Evin Lewis would be important for Rajasthan Royals in this match while Chris Gayle and Mohammed Shami, who has had a terrific time in the UK, would be crucial players for Punjab Kings.

Chris Morris vs Chris Gayle would be one of the most interesting duels to watch out for and so would be the battle between Mohammed Shami and Sanju Samson. Both these mini battles could go a long way in determining the outcome of this match.

Punjab Kings vs Rajasthan Royals (PBKS vs RR) match in IPL 2021 will be played at the Dubai International Stadium in Dubai. The game is scheduled to begin at 07:30 pm IST (Indian Standard Time). Toss will be held at 07:00 pm.

(The above story first appeared on LatestLY on Sep 20, 2021 04:00 PM IST. For more news and updates on politics, world, sports, entertainment and lifestyle, log on to our website latestly.com).