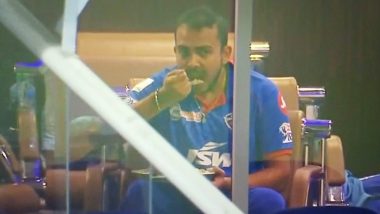 Prithvi Shaw’s dismal form in Dream11 Indian Premier League (IPL) continued against Chennai Super Kings as he perished without even opening his account. This was the Delhi Capitals opener’s second consecutive duck this season and fans were clearly not amused. Shaw faced a lot of criticism on social media. However, what irked netizens, even more, is the fact that the youngster was ‘enjoying’ a meal after getting out. While skipper Shreyas Iyer and Shikhar Dhawan was battling to bring DC innings back on track, the camera caught Shaw having food in the dressing room. The picture apparently got viral, and the 20-year-old again became a victim of trolls. DC vs CSK Stat Highlights IPL 2020.

The Thane-born batsman has been a hot property in the Indian cricket ever he since he guided India to the triumph in ICC Under-19 Cricket World Cup 2020. Shaw continued to showcase his prowess in domestic cricket but is accused of not delivering consistently. He even has scored two half-centuries in this season but couldn’t reach double digits in five of the nine games. Owing to the fact, fans were already not happy with Shaw and the batsman’s picture while eating invited even more trolling. Shikhar Dhawan Scores His Maiden Century in Indian Premier League.

Sorry I was too much hungry, and I was not eating a “Duck”.

People at weddings: Hate it when photographers focus their cameras while we eat. 😡

Meanwhile, Shaw’s performance didn’t affect Delhi much as they defeated Chennai Super Kings by five wickets and went at the top of team standings. Opener Shikhar Dhawan, who scored his maiden IPL century in the game, was the chief architect of DC’s victory while Axar Patel’s three sixes in the last over were the cherry on the cake. They will next take the field against KL Rahul’s Kings XI Punjab at the Dubai International Cricket Stadium on October 20.

(The above story first appeared on LatestLY on Oct 18, 2020 08:34 PM IST. For more news and updates on politics, world, sports, entertainment and lifestyle, log on to our website latestly.com).