Both sides would give it their best in this game as the winner would go on to face the loser of Qualifier 1, in a bid to make it to the final while the loser would have to pack their bags and return home. Sharjah has traditionally seen low-scoring encounters in IPL 2021 and but with the batsmen from both sides in good form, that narrative might be rewritten. 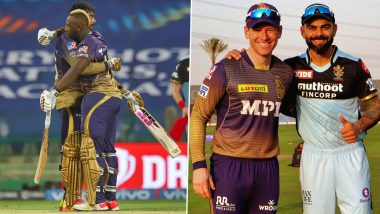 Pictures from the KKR vs RCB clash in Abu Dhabi earlier this season (Photo credit: Twitter)

Royal Challengers Bangalore (RCB) are set to avenge their humiliating defeat earlier this season against Kolkata Knight Riders (KKR) when they square off against the two-time champions in the Eliminator on Monday, October 11. The match would be played at the Sharjah Cricket Stadium and would begin at 7:30 pm IST (Indian Standard Time). Bangalore regained some of their lost momentum with KS Bharat winning them their last group stage clash against table-toppers Delhi Capitals with a last-ball six. Although KKR finished fourth and officially qualified for the playoffs on the last day of the league stage matches, it can be argued that Eoin Morgan's men have staged a dramatic turnaround to make it to the last four. Placed seventh at the start of the UAE leg of IPL 2021, KKR have played free-flowing, fearless and aggressive cricket, something that has breathed new life in their campaign and they are now up against a side, whom they defeated quite convincingly on September 20 in Abu Dhabi.RCB vs KKR Preview: Likely Playing XIs, Key Battles, Head to Head and Other Things You Need To Know About VIVO IPL 2021 Eliminator

However, they would not make the mistake of taking their opponents lightly. Virat Kohli's Bangalore did begin with few losses but bounced back strongly to enter the playoffs. Most of it has been possible due to the form of Glenn Maxwell, who has once again rolled back the years to when he was at his destructive best. The Australian has shouldered the weight of RCB's middle-order and the franchise would also be delighted to see young guns like Bharat firing and winning matches. In terms of the bowling attacks, both sides seem to be evenly balanced with both KKR and RCB bowlers at the top of their game.RCB vs KKR Dream11 Team Prediction IPL 2021: Tips to Pick Best Fantasy Playing XI for Royal Challengers Bangalore vs Kolkata Knight Riders, Indian Premier League Season 14 Eliminator 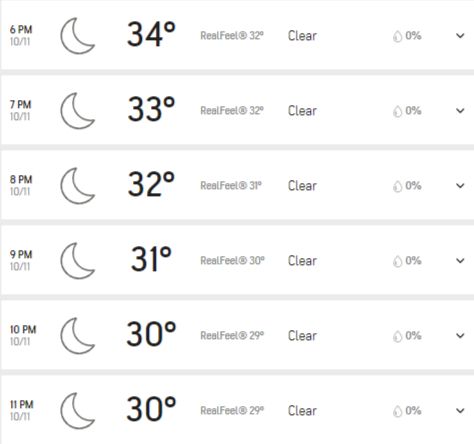 Expected weather in Sharjah at the time of the RCB vs KKR Eliminator clash in IPL 2021 (Source; Accuweather)

The weather at this ground during the time of this match seems to be quite pleasant, with the temperature fluctuating between 30-34 degrees celsius. Also, there seems to be no rain or other weather-related interruptions and the sky is expected to remain clear throughout the game.

The pitch at this ground has provided a lot of assist to the spinners and hence, few low-scoring games took place at this venue at the start of the UAE leg. However, both KKR (against Rajasthan Royals) and RCB (against Punjab Kings) have given examples of how to bat on this kind of a strip. Players like Yuzvendra Chahal, Varun Chakravarthy, Shahbaz Ahmed and Sunil Narine would extract a lot of spin from this pitch and would aim to make life difficult for the batsmen. A first-innings total of 160-170 would be a competitive one on this pitch, given the fact that both sides possess some power-packed strikers of the ball.

(The above story first appeared on LatestLY on Oct 10, 2021 03:58 PM IST. For more news and updates on politics, world, sports, entertainment and lifestyle, log on to our website latestly.com).