RR Playing XI in IPL 2020: 4 Overseas Players Who Could Feature in Rajasthan Royals Line Up Throughout Dream11 Indian Premier League

Rajasthan Royals had a poor campaign last year, which saw them finish seventh in the league. Hence, this time around the franchise have added several players with T20 experience to their squad. Most of the new addition to the team have been international stars. Rajasthan Royals will begin their Indian Premier League 2020 campaign on September 22, 2020 against CSK. 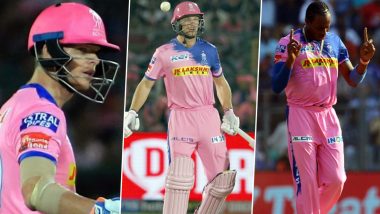 Rajasthan Royals will begin their Indian Premier League 2020 campaign on September 22, 2020 when they take on three-time winners Chennai Super Kings at the Sharjah Cricket Stadium. The franchise have appointed Australian Steve Smith as their new skipper after Ajinkya Rahane left for DC before the new season. So with a new captain leading the team, RR would be hoping to win their second-ever IPL title. RR Squad for IPL 2020 in UAE: Check Updated Players' List of Rajasthan Royals Team Led by Steve Smith for Indian Premier League Season 13.

Rajasthan Royals had a poor campaign last year, which saw them finish seventh in the league. Hence, this time around the franchise have added several players with T20 experience to their squad. Most of the new addition to the team have been international stars, but with only four overseas players allowed in the starting XI, we take a look at four foreign players who could feature for RR throughout IPL 2020. RR Team Profile for IPL 2020: Rajasthan Royals Squad in UAE, Stats & Records and Full List of Players Ahead of Indian Premier League Season 13.

The Australian was appointed as the skipper of RR ahead of the new season following the departure of Ajinkya Rahane. Smith has previously captain Rising Pune Supergiants to the final in the 2017 edition and will be hoping to do the same this year. The Australian is expected to miss a couple of games at the start due to concussion issues but will be a regular feature once recovered.

The Englishman has been a crucial player for RR in the last couple of seasons and will once again spearhead their bowling attack. The pacer is coming off a brilliant series performance with England and will be hoping of continuing that form in IPL 2020. He has taken 26 wickets in 21 games in the competition.

Jos Buttler is one of the best white-ball cricketer’s in the world at the moment and will once again be crucial for the team at the top of their batting order. The Englishman has been one of Rajasthan Royal’s leading run scorer’s in the past two seasons and his form will be important if they are to go far in the competition.

The South African was bought by Rajasthan Royals for a base price of 75 lakhs during the player auction in December last year. The 31-year-old has the ability to change the game at any moment and was in brilliant form before lockdown. Miller is expected to replace Ben Stokes in the line-up whose availability for IPL 2020 is not yet confirmed as the Englishman is currently in New Zealand with his unwell father.

These four players are expected to be a regular feature in the line-up of Rajasthan Royals thorough out the series unless injuries or lack of form play a part. The franchise won the competition during its inaugural edition but have failed to replicate that performance since and will be looking to break that run.

(The above story first appeared on LatestLY on Sep 18, 2020 02:21 PM IST. For more news and updates on politics, world, sports, entertainment and lifestyle, log on to our website latestly.com).