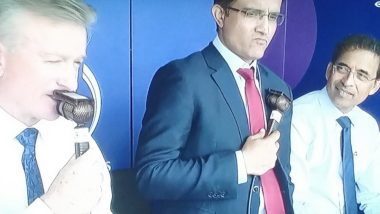 India is currently locking horns with New Zealand in the semi-finals of the CWC 2019 at the Old Trafford. However, there was one stand out moment was when Australia’s World Cup-winning captain Steve Waugh was in the commentary box with Sourav Ganguly and Harsha Bhogle. While one must have thought that the fans would thoroughly enjoy each bit of commentary, but out turned out to be the opposite as they were quite annoyed with the same. India vs New Zealand Cricket Score 1st Semi Final ODI Match.

According to the fans, Steve Waugh was continuously speaking about Australia’s World Cup victory in 1999. The 15-20 minute segment turned out to be quite annoying for the netizens and they lashed out at the former Australian captain for bragging about the victory. Check out a few tweets below: DLS Method Revised Targets for India if New Zealand Doesn't Continue Batting During IND vs NZ CWC 2019 Semi-Final Game, Check All the Scores.

Every NZ fan: SHUT THE FUCK UP STEVE IT'S NOT 1999, YOU'RE NOT EVEN IN THIS GAME

Me, when Steve Waugh starts talking about some game from 20 years ago. #nzlvind #BlackCaps pic.twitter.com/2ViDlKmQDx

This netizen assumed that Sourav Ganguly joined Hindi commentary team for a reason.

Dada rushed from the hindi commentary box to be with Steve Waugh. He didn't want to keep him waiting

The middle overs were so painful to watch that they had to bring Steve Waugh into the comm box to answer endless questions about the 1999 WC with even the 2001 test series thrown in.#CWC19 #INDvsNZ

Tired of Steve Waugh blabbing about Australia while NZ are playing India. Our batsmen saving themselves for the second innings!

As of now, the rain has played a spoilsport and has obstructed the play. The Kiwis have already played for 46.1 overs and have only managed to put up 211 runs on the board with the loss of five wickets. The match will resume on Wednesday from where it ended on Tuesday.

(The above story first appeared on LatestLY on Jul 09, 2019 08:36 PM IST. For more news and updates on politics, world, sports, entertainment and lifestyle, log on to our website latestly.com).