This Day That Year: Sri Lanka Register Highest Team Total in Test Cricket With Score of 952/6 vs India 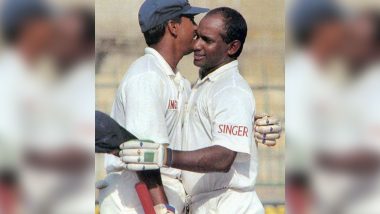 Sri Lankan Cricket Team put on a batting exhibition against India on this day (August 6) in 1997 and posted the highest score in Test cricket, a record which still stands. It was the first Test match of the series and the venue was the R Premadasa Stadium in Colombo. Batting first, India declared at a mammoth score of 537/8 thanks to centuries from Navjot Singh Sidhu, skipper Sachin Tendulkar and Mohammad Azharuddin. In reply, Arjuna Ranatunga’s Men toiled the Indian bowling line-up and posted and declared at a gigantic score of 952/6. This Day That Year: Kumar Sangakkara, Mahela Jayawardene Record Highest Partnership in Test Cricket With 624-Run Stand.

Sanath Jayasuriya and Marvan Atapattu opened the innings for the home team in the second innings. The latter fell prey to leg-spinner Nilesh Kulkarni after scoring just 26 runs but Jayasuriya was determined to make a mark. The southpaw was accompanied by Roshan Mahanama who came to bat at number three. The duo showcased great resilience against the challenging deliveries while they also sent the bad ones to the boundary ropes. The likes of Anil Kumble and Venkatesh Prasad looked completely ineffective and the shoulders of the Indian players were down. IPL 2020 Players Update: MI’s Lasith Malinga, RCB’s Isuru Udana to Miss First Few Matches Due to Sri Lanka Premier League.

#OnThisDay in 1997, Sri Lanka put up 952/6d against India – the highest innings total by a team in Test history 🤯 pic.twitter.com/frVufBwjMh

Both Jayasuriya registered a magnificent triple century (340) while Mahanama scored double hundred (225) as Sri Lanka went past India’s first-innings total. The duo piled up 576 runs for the second wicket, the then highest partnership in Test cricket. At the score of 615, however, both the set batsmen were dismissed.

Nevertheless, Aravinda de Silva came out to bat at number four and he continued the mission of tormenting Indian bowlers. He also went on to score a century (126) while skipper Arjuna Ranatunga (86) fell 14 runs short of the three-figure mark.

Mahela Jayawardene (66) scored the last half-century of the Lankan innings as the game was over with the home team scoring 952/6. The match, however, ended in a draw but the history books were rewritten. Sanath Jayasuriya received the Man-of-the-Match award for his magnificent double century.

(The above story first appeared on LatestLY on Aug 06, 2020 02:15 PM IST. For more news and updates on politics, world, sports, entertainment and lifestyle, log on to our website latestly.com).