Brighton vs Manchester United, Premier League 2019–20: Paul Pogba, Anthony Martial and Other Players to Watch Out in BHA vs MUN Football Match

Brighton shocked Arsenal with a comeback 2-1 win and held the third-placed Leicester City to a goalless draw. They are currently placed 15th in the points table with 33 points after 31 matches. Manchester United, from the same number of games, have 49 and are sixth. Solskjaer’s side drew 1-1 at Tottenham Hotspur and beat Sheffield United 3-0. 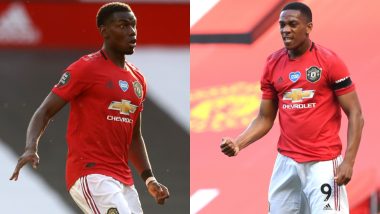 Manchester United will eye a third successive win across all competitions when they play Brighton in their next Premier League 201920 fixture. United are also unbeaten in their last 14 games and will hope to extend it for many more matches as they chase Champions League football. Brighton are six points clear of the relegation zone but will hope for another favourable to guarantee their stay in top-flight next season. Both United and Brighton drew one and won another in the two league matches they have played since the Premier League resumed earlier this month. Brighton vs Manchester United Dream11 Prediction in Premier League 2019–20.

Brighton shocked Arsenal with a comeback 2-1 win while they held the third-placed Leicester City to a goalless draw. They are currently placed 15th in the league points table with 33 points after 31 matches. Manchester United from the same number of games have 49 and are sixth. Solskjaer’s side drew 1-1- at Tottenham Hotspur and beat Sheffield United 3-0. They also overcame Norwich City 2-1 in extra-time in the FA Cup quarter-finals. As both sides clash, take a look at some key players to watch out for. Manchester United Boss Ole Gunnar Solskjaer Eager to Take on Chelsea in FA Cup 2019-20 Semi-Final Clash.

The World Cup-winning Frenchman has been sensational since his return after a long injury layoff. He came off the bench against Tottenham and earned United the penalty from which they drew, was involved in some great play against Sheffield United and also played the key pass that led to Harry Maguire’s goal against Norwich in the FA Cup. Pogba created four chances off the bench against Norwich. His understanding with Bruno Fernandes and the forwards could be key to United’s fate this campaign.

He has been key to Brighton’s season so far and will once again be their main attacking pivot against United. Maupay created great problems for the Arsenal defence before scoring the winning goal in Brighton’s first game after a three-month lockdown. He has already scored nine times in the league and is the club’s highest goalscorer for this season. He has also struck the most number of shots on target for Brighton (85).

Another Frenchman and another key player for Manchester United. Martial recorded his first senior hat-trick against Sheffield United last week and will be buzzing with confidence when the Red Devils visit the South Coast. The hat-trick took his season league tally to 14 goals, joint club highest with Marcus Rashford. Martial will definitely be hungry for more and will also want to rub off claims of inconsistency with another match-winning performance at Brighton.

The Portuguese has been the best player for Manchester United since joining them in January. He has already scored four times and has as many assists in the Premier League. But Fernandes looked exhausted and had his worse match against Norwich where he failed to create a single chance. It remains to be seen whether Solskjaer will rest him or start him again after three successive games within a week. But if he does start, Fernandes will hope to link-up again with Pogba.

(The above story first appeared on LatestLY on Jun 30, 2020 02:47 PM IST. For more news and updates on politics, world, sports, entertainment and lifestyle, log on to our website latestly.com).