Chelsea are looking to sign Alessio Romagnoli in the summer on a free transfer. However, the Blues will not be the only club hoping to land the Italian as many top European clubs are looking to acquire his services. 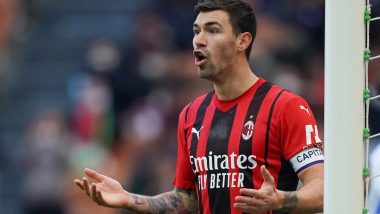 Chelsea are looking to strengthen their squad for the next summer and have already identified their targets despite the club takeover saga. The Blues are targeting AC Milan skipper Alessio Romagnoli who will be out of contract at the end of the season. The Italian defender has been one of the stalwarts at the Serie A Club. Ousmane Dembele Transfer News: Chelsea To Reopen Talks With Barcelona Winger.

According to a report from Metro, Chelsea are looking to sign Alessio Romagnoli in the summer on a free transfer. However, the Blues will not be the only club hoping to land the Italian as many top European clubs are looking to acquire his services. Chelsea Defender Antonio Rudiger Set To Join Real Madrid in Summer Transfer Window.

The centre back joined the Rossoneri in 2015 and has been a regular in the first team since then, The defender is set to win his first Serie A title as AC Milan are two points clear heading into the final day and can lift the Scudetto, their first league triumph in 11 years.

Alessio Romagnoli has been offered a new contract by the Milan outfit but the defender has decided not to accept it as looks to take on a new challenge with multiple European clubs looking to sign him.

Chelsea are one of the teams looking to sign the experienced defender as they are need of a defensive revamp in the summer. The Blues are set to lose Andreas Christensen and Antonio Rudiger with the two set to join Barcelona and Real Madrid respectively.

It is understood that Bayern Munich, Sevilla and Barcelona are all keen on the Italian and will challenge Chelsea for his signature. Romagnoli had previously been linked with a switch to Lazio, but talk of that move across Serie A has cooled in recent months.

(The above story first appeared on LatestLY on May 19, 2022 09:47 PM IST. For more news and updates on politics, world, sports, entertainment and lifestyle, log on to our website latestly.com).