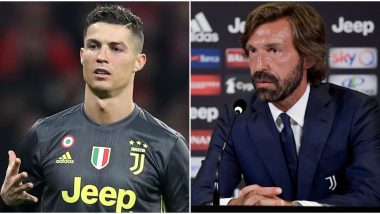 Andrea Pirlo has been appointed the new coach of Juventus after the club decided to sack Maurizio Sarri after just one season in charge. Sarri, who left Chelsea last season to join Juventus, led the club to the Serie A title but failed to win any more trophy. Under Sarri, Juventus were beaten by Napoli on penalties in the Coppa Italia final while they bowed out on away goals from the last 16 stage of the UEFA Champions League. Pirlo, who was initially appointed the head coach of the Juventus under-23 squad, was then promoted as the head coach of the senior team. Andrea Pirlo 'Honoured' to Be Named as Juventus Manager, Says 'Ready for This Amazing Opportunity'.

Pirlo, who has no managerial experience under his belt, will coach the team from the next season. The Italian legend though will have many experienced pros at his end with Cristiano Ronaldo one of them. The five-time Ballon d’Or winner is rumoured to be wanting to leave Juventus for PSG this summer. But if he stays, Pirlo will have an experienced forward at his disposal. Ronaldo and Pirlo, however, supposedly don’t enjoy a good cordial relationship. Video of Andrea Pirlo Outfoxing Cristiano Ronaldo Goes Viral Following Former AC Milan Midfielder’s Appointment As Juventus Manager.

The 41-year-old once snubbed Ronaldo from his Champions League dream team. Pirlo, who won two UCL titles with AC Milan and played in a final with Juventus, had picked Lionel Messi over Ronaldo in his Champions League dream team. The midfield maestro had picked Kaka, Lionel Messi and Fillipo Inzaghi as his three-man forward-line while overlooking Ronaldo for the team.

He will certainly not be able to overlook the Portuguese star for the playing XI given Ronaldo stays at the club next season. The new Juventus manager had even praised Messi and said he believed the Argentine and Barcelona forward will win more in his career. “He (Messi) has achieved so much, but still I am sure will achieve so much more. I don’t need to talk in detail about what he is capable of. Everybody knows he is one of the greatest ever already.”

(The above story first appeared on LatestLY on Aug 11, 2020 11:00 AM IST. For more news and updates on politics, world, sports, entertainment and lifestyle, log on to our website latestly.com).