How to Watch Crotone vs Juventus, Serie A 2020-21 Live Streaming Online in India? Get Free Live Telecast of CRO vs JUV Football Game Score Updates on TV 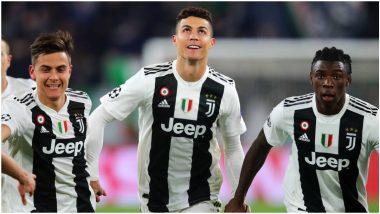 Juventus will hope to extend its unbeaten run when they play newly-promoted Crotone in their next Serie A 2020-21 match on October 18 (Sunday). The defending Serie A champions will be without Cristiano Ronaldo and midfielder Weston Mckennie after both tested COVID-19 positive earlier this week. Crotone vs Juventus match will be played at the Ezio Scida football stadium. Meanwhile, fans in India searching for how to watch the Crotone vs Juventus match should scroll down for all information, including the live telecast and free live streaming online on SonyLiv. Juventus Chief Backs Cristiano Ronaldo After Coronavirus Protocol Violation Claim By Italian Sports Minister.

Crotone have lost each of the three games they have played in the new season. They started the season with a 1-4 loss to Genoa and followed it with another disappointing 0-2 defeat to AC Milan before succumbing to a 1-4 loss to Sassuolo. Juventus, on the other, started with a 3-0 win against Sampdoria but were held to 2-2 draw by AS Roma. They were also awarded a 3-0 win against Napoli after the latter failed to turn up for the clash at Turin due to COVID-19 results in the squad.

Crotone vs Juventus, Serie A 2020-21 Match Time and Schedule in India

Crotone vs Juventus match in Serie A 2020-21 will take place on October 18 (Saturday midnight). The clash will be played at the Ezio Scida football stadium and it is scheduled to start at 12:15 am IST (Indian Standard Time).

How to Watch Crotone vs Juventus, Serie A 2020-21 Live Telecast and Free Live Streaming Online in India

Fans in India can follow live action of the Serie A 2020-21 on Sony Sports channels. Sony Pictures Sports Network (SPSN) is the official broadcaster for Serie A 2020-21 in India. Fans can catch the live telecast of Crotone vs Juventus on Sony Ten 2 and Sony Ten 2 HD channels. The match will also be live on Sony’s online streaming media platform SonyLiv.

(The above story first appeared on LatestLY on Oct 17, 2020 10:15 PM IST. For more news and updates on politics, world, sports, entertainment and lifestyle, log on to our website latestly.com).