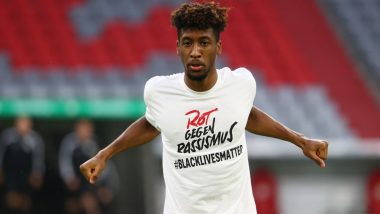 Manchester United are reportedly in talks with Bayern Munich star Kingsley Coman and are interested in bringing the Frenchman to Old Trafford in this summer transfer window. United have been in the lookout for players in the wide positions and although Jadon Sancho remains their no 1 priority, the club are looking at other options in case they fail to reach towards an agreement with Borussia Dortmund for the Englishman. Coman is also said to be keen into making a switch to Old Trafford this summer and link up with fellow France teammates Anthony Martial and Paul Pogba. Manchester United Receive Huge Boost, Borussia Dortmund Ready to Sell Jadon Sancho.

According to a report from The Athletic, United have contacted the 24-year-old for a switch to England and are in talks with Bayern for a permanent deal or a loan move with a buy option. Coman, who joined Bayern from Juventus in 2015, has been subject to transfer rumours after the Bavarians signed Leroy Sane from Manchester City earlier this month. Sane, Germany international, is expected to be immediately slotted into the starting XI leaving Coman on the sidelines. Jadon Sancho, Jack Grealish and Three Other Players Who Could Join Manchester United This Summer.

Coman came through the Paris Saint-Germain academy but played only three matches for the senior team before moving to Italy and joining Juventus, where he mostly came off the bench. He played three seasons in Italy and won the Serie A twice but managed only 15 appearances before being sent on loan to Bayern.

Coman played two seasons on loan at Bayern before making the loan move permanent. He has enjoyed a trophy-laden career and have league titles in France, Italy as well as in Germany with Bayern.

United, meanwhile, will hope they can lure him to Old Trafford with the club in need of more quality players in the wing positions. Man United will play their final league match against Leicester City and need to avoid defeat at the King Power Stadium to confirm Champions League football for next season. Ole Gunnar Solskjaer’s side are currently placed third in the standings and can finish there with a win at Leicester.

(The above story first appeared on LatestLY on Jul 24, 2020 11:08 PM IST. For more news and updates on politics, world, sports, entertainment and lifestyle, log on to our website latestly.com).