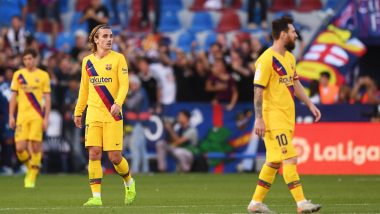 Lionel Messi and Antoine Griezmann have never been in the best of terms ever since the former Atletico Madrid player got transferred to Barcelona. Now here’s one more report that further proves that there is a rift between the two players. As per a report surfaced online, the six-time Ballon d’Or winner has reportedly humiliated Antoine Griezmann in front of the entire dressing room after their disappointing draw against Atletico Madrid, La Liga 2019-20. The reasons for the showdown are still unknown but it is said that the Greizmann could have created a scene in the dressing room for the lack of game time. Antoine Griezmann’s Family Slam Barcelona Manager on Quique Setien For the Treatment Given to Him at the Club.

He had practised for the entire second half but only featured in the game for not more than five minutes. The team faced 2-2 draw against Atletico Madrid and this ruined the chances of the team winning their 10th La Liga title. It is further reported that after the match, Messi went on to humiliate the Griezmann mercilessly in front of the entire dressing room.

Prior to this Antoine Griezmann's family was also quite unhappy with the fact that he was given such a less game time. Griezmann's brother posted a series of tweets on social media and then deleted them after they started getting a lot of attention. His father Alain Griezmann reportedly took to Instagram and aimed a sly dig at Quique Setien and said that the manager was merely a passenger and not the driver.

(The above story first appeared on LatestLY on Jul 03, 2020 04:32 PM IST. For more news and updates on politics, world, sports, entertainment and lifestyle, log on to our website latestly.com).