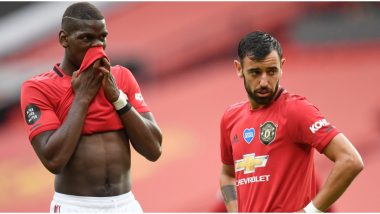 England’s heavyweights Manchester United will take on Danish side FC Copenhagen in the quarter-finals of the Europa League 2019-20. The match will be played at RheinEnergieStadion on August 10, 2020 (late Monday night). Ole Gunnar Solskjaer’s men are one of the favourites to win the competition but need to get past a side who have won seven of the last ten domestic league titles in Denmark. Manchester United vs Copenhagen, UEFA Europa League 2019–20 Live Streaming Online.

The teams have met on European stage juts once, in the group stage of 2006-07 Champions League campaign, with both the sides winning their respective home games. However, due to the new UEL format amid coronavirus pandemic, the match will be played at a neutral venue in a one-off tie rather than the traditional two-legged affair. MUN vs COP Dream11 Prediction in Europa League 2019–20.

This is the first time that FC Copenhagen have reached the quarter-finals of a major European tournament while Manchester United will be hoping to get a win and book a place in semi-finals for just the second time since Sir Alex Ferguson’s retirement. Last time they managed this feat was in 2016 when the Red Devils won the title under Jose Mourinho.

Both teams will be hoping to get the win and book a place in the semi-finals. So as Manchester United and FC Copenhagen face each other in this crucial clash we take a look at key players from both the teams.

The Portuguese international has been the turning point for the Red Devils this season as since his arrival they have been a completely different side. Fernandes was rested in the game against LASK but will surely feature from the start.

The Frenchman has been brilliant since his return from injury and his partnership with Bruno Fernandes has been one of the reasons behind Manchester United’s recent form. The 27-year-old made his first appearances in the competition when he came off the bench against LASK so he will be eager to produce a match-winning performance in this game.

The Danish footballer was brilliant ion the round of 16 against Istanbul Basaksehir as his brace helped Copenhagen to turn a 1-0 deficit from the first leg. His form in this game would be important if the Danish club are to make the first semi-final appearance in their history.

(The above story first appeared on LatestLY on Aug 10, 2020 10:04 PM IST. For more news and updates on politics, world, sports, entertainment and lifestyle, log on to our website latestly.com).