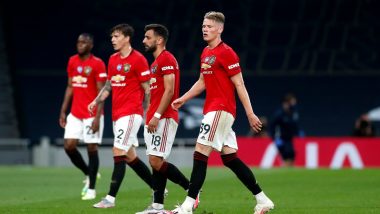 Manchester United vs Copenhagen Live Streaming Online: Manchester United face Copenhagen in the UEFA Europa League quarter-final with Ole Gunnar Solskjaer focussed on winning his first trophy as the Red Devils manager. The English giants have already made it to next years UEFA Champions League by finishing third in the Premier League season gone by. This enables the squad to take up Europa League more like a title up for grabs rather than a Champions League qualification lifeline. Danish club Copenhagen finished runners-up in their league and have their eyes firmly set on making it to the semi-finals. MUN vs COP Dream11 Prediction in Europa League 2019–20: Tips to Pick Best Team for Manchester United vs FC Copenhagen Football Match.

The absence of Luke Shaw for the remainder of the season is a huge blow for Manchester United but they will be buoyed by the performance on Brandon Williams in his place. The youngster has signed a new contract at the club and will be eager to repay the faith shown in him by his manager. Bruno Fernandes, Paul Pogba, Nemanja Matic, Mason Greenwood and Marcus Rashford should all return to the playing eleven after being given a breather against LASK. Odion Ighalo will drop back to the bench in order to accommodate the in form Anthony Martial. The playmaking skills of Bruno Fernandes could come in handy for the Red Devils once again as he is capable of opening up any defences. We Were Not the Best Before and We Are Not the Worst Now, Says Manchester United Midfielder Bruno Fernandes.

Michael Santos is suspended for Copenhagen while the likes of Ragnar Sigurdsson, Nicolaj Thomsen and Viktor Fischer are ruled out due to fitness issues. Jens Stage in the middle of the park is a livewire for this team as he is adept at cutting the supply line of his rivals. Mikkel Kaufmann should start as the lone striker for the Danish outfit with support from playmaker Jonas Wind in the final third.

Manchester United vs Copenhagen match in UEL 2019-20 will be played at RheinEnergieStadion on August 11, 2020 (Monday mid-night). The game has a scheduled time of 12:30 an IST.

Where to Watch Manchester United vs Copenhagen, Europa League 2019-20 Football Match on TV?

Sony Sports are the official broadcasters of UEL in India. So fans can tune into Sony Ten channels to catch the live-action of Manchester United vs Copenhagen on TV.

How to Get Free Live Streaming Online of Manchester United vs Copenhagen, Europa League 2019-20 Football Match?

UEL 2019-20 will be streamed live on OTT platform such as SonyLIV. So fans can tune into SonyLiv App and website to get the live streaming of Manchester United vs Copenhagen. Jio Users can also watch the game live on JioTV App. Manchester United are clear favourites for this competition although knock-out games can be unpredictable at times. Expect the Red Devils to make it to the next round courtesy a 2-1 win.

(The above story first appeared on LatestLY on Aug 10, 2020 05:07 PM IST. For more news and updates on politics, world, sports, entertainment and lifestyle, log on to our website latestly.com).