Netherlands and Canada are all set to lock horns with each other today for Group Stage of the FIFA Women's World Cup 2019. 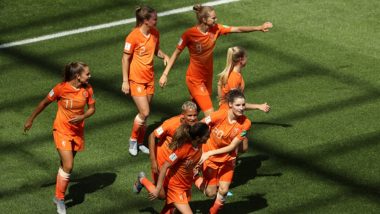 Netherlands and Canada are all set to lock horns with each other today for Group Stage of the FIFA Women's World Cup 2019. The match will be held at Stade Auguste-Delaune. Before getting into the live streaming details of the match, let’s have a quick look at the FIFA Women's World Cup 2019 Group E standings. Netherlands leads the Group E with six points.  Canada who also has six points in their kitty is placed on number two. Both teams have registered a couple of wins in the group stage and have already registered their spot for the next round. FIFA Women's World Cup 2019 Schedule Free PDF Download in IST: Fixtures, Groups, Time Table in Indian Time with Venue Details of Football WC in France.

Canada had made it into the quarterfinals of FIFA Women’s World Cup 2015. However, the team lost to England 2-1 which marked the end of their World Cup journey. On the other hand, Netherlands has come a long way in these four years. The winner of the game will relatively have an easier opponent to face. The loser will have to lock horns with USA or Sweden. FIFA Women's World Cup 2019: From Teams to Schedule And Venues, All You Need to Know About the Football Mega Event.

Netherlands vs Canada will take place on June 20, 2019 (Thursday), Stade Auguste-Delaune, France. This is the last match of Group E of 2019 FIFA Women’s Football World Cup. The match will begin at 9:30 PM IST.

If you are not able to tune into television for whatever reasons, you can also catch Netherlands vs Canada FIFA Women’s Football World Cup 2019 match with the live streaming option available on Sony Liv. The official website of FIFA will also get you all the live updates of the game.

(The above story first appeared on LatestLY on Jun 20, 2019 08:00 PM IST. For more news and updates on politics, world, sports, entertainment and lifestyle, log on to our website latestly.com).