The Spaniard had earlier coached Everton's rivals Liverpool, joining the Reds back in 2004. 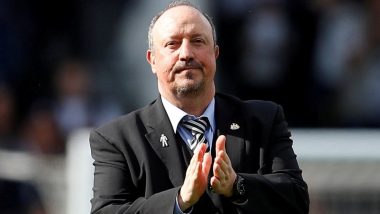 Premier League club Everton is reportedly all set to sign Rafa Benitez as their new manager ahead of the 2021-22 season. Benitez, if appointed would succeed Italian Carlo Ancelotti, who had led the Merseyside club to a 10th place finish in the Premier League last season, despite a promising start. He then subsequently left Everton to join Real Madrid as their new manager on June 1. Benitez had earlier managed Everton's arch-rivals Liverpool and had controversially referred to The Toffees as a 'small club' following a goalless draw at Anfield, way back in 2007. This memory has sparked mixed reactions from the Everton fans. As a matter of fact, some Everton fans allegedly threatened Benitez to not sign for the club with a banner that read, "We know where you live, don’t sign." Premier League 2021-22 Fixtures: From Chelsea to Manchester United, Here’s Who the Big Six of EPL Would Face in Their Opening Matches

Benitez took charge of Liverpool in the year 2004 and led them to their Champions League title in 2005 and followed it up with a FA Cup win in 2005. The Spaniard also led Chelsea to Europa League glory in 2013 while being their interim manager.

(The above story first appeared on LatestLY on Jun 30, 2021 08:03 PM IST. For more news and updates on politics, world, sports, entertainment and lifestyle, log on to our website latestly.com).