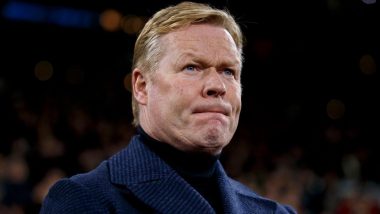 Being a Barcelona manager is surely not easy!  Ronald Koeman has been in the eye of the storm ever since they lost the La Liga 2020-21 title. Post this, there has been Koeman's future has been in doubt ever since. Every second day we read reports of how the Barcelona manager can be replaced. Amid this chaos, reports claim that the Barcelona manager has been hospitalised due to anxiety issues. He is currently being treated at the Barcelona hospital. However, there is nothing series with the 59-year old and things are fine with him. It is widely reported that Joan Laporta will decide his future in the coming days. Barcelona Boss Ronald Koeman Suffers From Nose Bleed During Press Conference Ahead of Sevilla Clash in La Liga 2020-21 (Watch Video).

Barcelona has had a rough season this year. The team lost to PSG in the Champions League 2020-21 and was ousted from the round-of-16 itself. Losing the league title acted like salt on their wounds. They did win the Copa del Rey trophy, but that wasn't enough. After the team lost the title, Laporta had said that there could be major changes in the upcoming weeks. He had further emphasised that the team needs to work hard and get better. In subtle words, the Barca President had also issued a warning that there could be a few tough calls made to ensure better results.

Last year, Koeman had undergone surgery in Amsterdam post a small heart attack. Prior to this, he had a bleeding nose during one of the conferences. We hope Ronald Koeman gets better soon!

(The above story first appeared on LatestLY on May 28, 2021 02:38 PM IST. For more news and updates on politics, world, sports, entertainment and lifestyle, log on to our website latestly.com).