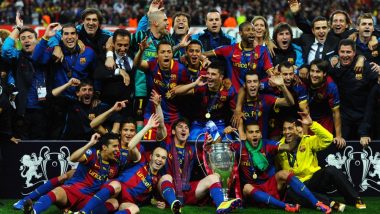 Barcelona has given way too many great moments to the fans which they cherish even till date. But winning the title is always special. In this edition of This Day That Year, we talk about the match between Barcelona and Manchester United, UEFA Champions League 2011 at the Wembley Stadium in London. It was Barcelona who walked away with the won the game by 3-1. It wouldn’t be wrong to say that the Catalan Giants had been dominating the game right from the start of the match. Barcelona outplayed the Red Devils in every aspect of the game. Lionel Messi DESTROYS Barcelona in Training Session, Looks More Than Ready for Return (Watch Videos).

The Catalan Giants had a controlling rate 68 per cent of possession and having 22 attempts on goal compared to United's 4. Pedro Rodriguez was the first one who scored the goal at the 27th minute of the game. Wayne Rooney brought in an equaliser at the 34th minute of the match. Barcelona's continued dominating in the second half as well. Messi almost gave Barcelona the lead in the 52nd minute when he latched onto a rebound from a Van der Sar save from Dani Alves, but Patrice Evra cleared off the line with his head. However this time, Messi netted a goal at the 54th minute. David Villa was the one who scored at the 69th minute of the match.

🔝 @Guaje7Villa sealed our 4th @ChampionsLeague 🏆 with this STUNNING shot...

Needless to say that the fans still relish the winning moments and are quite happy with the win as well. Talking about the Catalan Giants, so far team Barcelona has won five titles for of the UEFA Champions League titles.

(The above story first appeared on LatestLY on May 28, 2020 05:17 PM IST. For more news and updates on politics, world, sports, entertainment and lifestyle, log on to our website latestly.com).