Paulo Dybala and Cristiano Ronaldo should start as the two man forward line for Juventus with Andrea Pirlo likely to adapt a 4-4-2 formation. Adrian Rabiot, who has been linked with a move away from the Italian giants, should get the nod in midfield with Rodrigo Bentancur besides him. 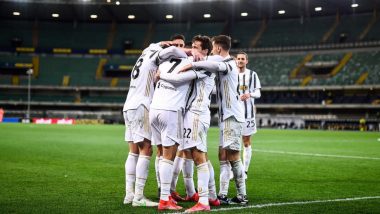 Juventus have had a below-par season under the management of Andrea Pirlo where they are on course to lose the Serie A title for the first time in a decade and have also faced an early Champions League exit. Their hope for making it to Europe’s top competition depends on how they end their domestic campaign starting with the game against Udinese. The Bianconeri are currently 5th with 66 points, level on points with 4th placed Napoli. They will need to improve from their display against Fiorentina where their inability to break down tight defence came to the fore again. Opponents Udinese are 11th in the points table and they do not look like making it to the Europa League next season. Cristiano Ronaldo Included in 23-Member Squad for Serie A 2021 Match Against Udinese, Check Predicted XI of UDI vs JUV.

Udinese will be without the services of first-choice goalkeeper Juan Musso, who is suspended following accumulation of yellow cards. Kevin Bonifazi will line up at the centre of a back three that has the tough job of stopping Cristiano Ronaldo and co. Rodrigo De Paul is the key man in midfield for the hosts with the Argentine being a threat courtesy his driving runs. Stefano Okaka should start in a lone striker role with Roberto Pereyra behind him.

Paulo Dybala and Cristiano Ronaldo should start as the two man forward line for Juventus with Andrea Pirlo likely to adapt a 4-4-2 formation. Adrian Rabiot, who has been linked with a move away from the Italian giants, should get the nod in midfield with Rodrigo Bentancur besides him. Federico Chiesa has been in fine form for Juventus this campaign and his runs down the flank make him a genuine goal-scoring threat.

When is Udinese vs Juventus, Serie A 2020-21 Football Match? Know Date, Time and Venue

Udinese vs Juventus match in Serie A 2020-21 will take place on May o2, 2021 (Sunday). The match will be played at the Friuli Stadium in Udine and it is scheduled to begin at 09:30 pm IST (Indian Standard Time).

Where to Watch Live Telecast of Udinese vs Juventus, Serie A 2020-21 Football Match?

Fans in India can catch the live telecast of Udinese vs Juventus match on Sony Sports channels. Sony Sports Network is the official broadcasters of Serie A 2020-21in India. So fans can tune into Sony Ten 2 and Sony Ten 2HD channels to catch the live-action of clash.

How to Get Free Live Streaming Online of Udinese vs Juventus, Serie A 2020-21 Football Match?

Those fans unable to watch the game live on television can follow the game online. SonyLiv, the official streaming partner of Sony Sports Network, will be live streaming the Udinese vs Juventus match. So fans can tune into SonyLiv App or website to catch the live action of Serie A 2020-21 matches. Juventus have beaten Udinese in six out of their last seven meetings and looks like their winning run is likely going to continue with their latest encounter.

(The above story first appeared on LatestLY on May 02, 2021 06:03 PM IST. For more news and updates on politics, world, sports, entertainment and lifestyle, log on to our website latestly.com).