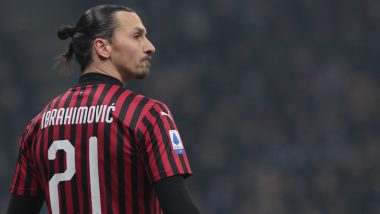 Zlatan Ibrahimovic has without a doubt changed the fortunes of AC Milan since his arrival in January. The Swede has got them back in contention for European places but believes that they would have been challenging for the Serie A title if they had signed him earlier in the season. The 38-year-old was on the scoresheet once again as he netted his fifth goal in the league against Cristiano Ronaldo-powered Juventus on Tuesday. AC Milan 4–2 Juventus, Serie A 2019–20 Match Result: Rossoneri Score Three Goals in Five Minutes to Stun the Table-Toppers.

Zlatan Ibrahimovic showed his class as he led AC Milan’s dramatic comeback in the 4-2 win against defending Italian champions Juventus. The Swede converted a penalty to get his side back in the match as he made it 2-1 just past the hour and then a few chaotic minutes saw Stefano Pioli’s men lead the game 3-2 by the 67th minute. Then Ante Rebic sealed the victory with a late strike. Cristiano Ronaldo Nets 30th Goal of the Season in Juventus' 2-4 Loss Against AC Milan in Serie A 2019-20.

As a result, Milan have climbed to fifth in the table having defeated Lazio and Juventus in two consecutive games. Zlatan scored in both of them, and after the match, the 38-year-old made some bold claims.

‘I am president, player and coach! The only negative is that I only get paid for being a player! If I had been here from the first day of the season, then we would've won the Scudetto.’ the former Sweden international told DAZN after his display against the soon to be champions.

Zlatan’s impact on AC Milan this season is there for everyone to see but there are rumours of the 38-year-old leaving the club once the season concludes. But when asked about his future, the Swede replied ‘We'll see, we'll see. There is a month still to enjoy myself, but there is a strange situation going on, and we are not in control of that,’

Though there is nothing certain about Zlatan’s new club, the Rossoneri’s will be hopeful of him renewing his contract as they are definitely a better team with the 38-year-old in the side than without him. Milan are involved in a three-way tussle for Europa League places and need their main man if they are to qualify.

(The above story first appeared on LatestLY on Jul 08, 2020 12:52 PM IST. For more news and updates on politics, world, sports, entertainment and lifestyle, log on to our website latestly.com).