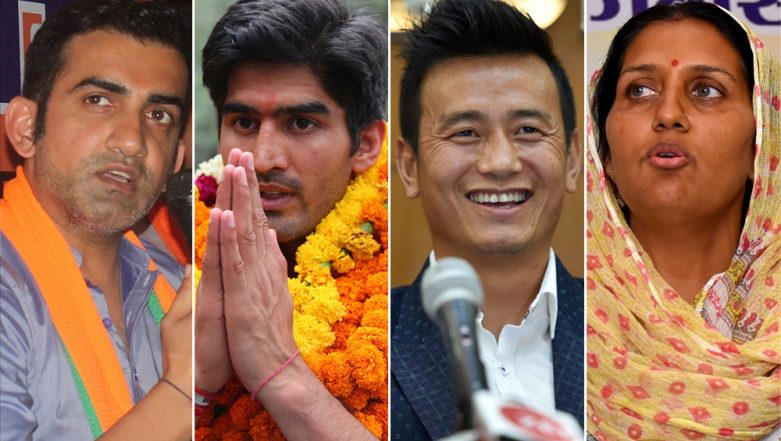 The Lok Sabha Elections were held throughout India from April 11 to May 19, 2019. The polling was done in  7 phases, in which the last phase took place this past Sunday. Ahead of General Election 2019 result, let us take a look at sportspersons like Gautam Gambhir, Vijender Singh and others who may well be on their way to becoming MPs or MLA after May 23. The counting of votes will take place on Thursday. East Delhi Lok Sabha Constituency in Delhi: Candidates, Current MP, Voting Date And Election Results 2019.

We often see eminent personalities from sports and film industry taking politics as their future career after retirement. Cricketers like Chetan Sharma and Navjot Singh Sidhu entered the political arena in the later part of their life.

Gambhir has played 58 Tests, 147 ODIs and 37 T20Is for the Indian cricket team. He used to bat in top order for India. Gambhir announced his retirement from International cricket in December 2018. He was also the skipper for Indian Premier League teams-Kolkata Knight Riders (KKR) and Delhi Daredevils (now known as Delhi Capitals). KKR won IPL 2012 and 2014 under his captaincy.

Bhartiya Janata Party (BJP) nominated Gautam Gambhir to contest election from the East Delhi constituency. The other major candidates who were competing for this seat are Atishi from Aam Aadmi Party and Arvinder Singh Lovely from Indian National Congress.

Vijender Singh is an Indian professional boxer who has won the bronze medal for India in the Olympics. He is the current WBO Asia Pacific Super Middleweight Champion and WBO Oriental Super Middleweight Champion from Kaluwas, Bhiwani district in Haryana. He won the first bronze medal of his career in 2006 Asian Games and went into win the bronze again at 2008 Beijing Summer Olympics where he defeated Carlos Góngora of Ecuador. South Delhi Lok Sabha Constituency in Delhi: Candidates, Current MP, Voting Date And Election Results 2019.

Bhaichung Bhutia has played as a striker for Indian National Football team at various International events. He was the first Indian footballer to sign a contract with European club Bury in 1999. He has won prestigious awards like Arjuna Award and Padma Shri. He retired from his football career in the year 2011.

Bhaichung Bhutia is making his electoral debut in the state of Sikkim by contesting assembly election from Gangtok and Tumin-Lingee from Hamro Sikkim party. The former Indian footballer will face competition from Ugen T. Gyatso of Sikkim Democratic Front and Sandup Tshering of Sikkim Krantikari Morcha in Tumin-Lingee seat.

Krishna Poonia is currently an MLA from Sadulpur constituency in Rajasthan. Indian National Congress has nominated her from Jaipur Rural constituency. She will have a stiff battle with Col. Rajyavardhan Rathore of Bhartiya Janata Party and Virender Singh Bidhuri of Bahujan Samaj Party.

All political parties will have their eyes glued to the numbers tomorrow (May 23, 2019) when the result of Lok Sabha Elections 2019 will be announced. The counting will begin from 8 am in the morning.