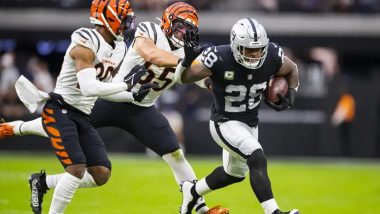 The NFL 2022 tournament will have the wildcard matches lined up this weekend. There are four games lined up for this weekend. In this article, we shall be looking at the live streaming details, lineups and other details of the tournament. The first game will be played between Bengals and Raiders, Paul Brown Stadium and will be held at 03.00 am IST.  The Bengals are favoured by 5.5 points and the total is 49. The last time the two teams met each other, the Bengals went on to beat Las Vegas 32-13 in Vegas. The second game will be played between Buffalo Bills vs New England Patriots on Sunday 06.45 am IST. Tampa Bay Buccaneers will be locking horns with Philadelphia Eagles.

The match will be played at 11.30 pm IST. Finally, on January 17, Dallas Cowboys vs San Francisco 49ers match will take place at the AT&T Stadium at 03.00 am IST. The playoffs of the NFL 2021-22 tournament will begin from January 15, 2022, and will go on until February 13, 2022. The postseason rugby tournament will conclude with Super Bowl LVI on February 13 at SoFi Stadium in Inglewood, California. In NFL 2020-21, Tampa Bay Buccaneers had won the title. The winners went on to defeat Kansas City Chiefs in Super Bowl LV on February 7 at Raymond James Stadium in Tampa, Florida.

(The above story first appeared on LatestLY on Jan 15, 2022 02:50 PM IST. For more news and updates on politics, world, sports, entertainment and lifestyle, log on to our website latestly.com).