R Praggnanandhaa Quick Facts: All You Need To Know About Indian Grandmaster Who Beat World Number One Magnus Carlsen at Airthings Masters

The young Indian chess star impressed one and all with a massive victory over five-time world champion and world number one Magnus Carlsen and it is the latest addition to his illustrious achievements in the sport. Let us take a look at some quick facts about the chess prodigy from Tamil Nadu. 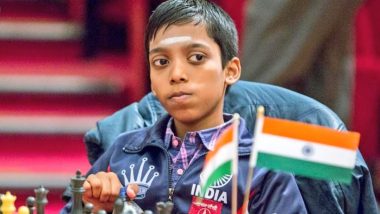 R Praggnanandhaa, or Rameshbabu Praggnanandhaa is certainly the talk of the town at the moment. The young Indian chess grandmaster possibly pulled off one of the most memorable victories in his young career over reigning champion and World Number one Magnus Carlsen at the Airthings Masters. Hailing from Chennai, Tamil Nadu, the prodigious chess talent is one of the brightest prospects in the sport and this impressive win over someone of Carlsen's stature is something that would be a huge boost for him as his career progresses. R Praggnanandhaa, 15-Year-Old Indian Grandmaster Beats World Number 1 Magnus Carlsen During Airthings Masters Online Chess Tournament

However, this is not the first time that the 16-year old has made it to the news. He had earlier become the second-youngest Grandmaster in the world. The Chennai boy undoubtedly is one of the fastest rising names in world chess and such rapid progress can only signal the start of a highly successful journey.

#The Indian chess star became the second-youngest ever to attain the title of grandmaster in the world when he reached the final round of the Gredine Open in 2018, at the age of 12 years, 10 months and 13 days.

#In 2013, Praggnanandhaa won the Under-8 World Youth Chess Championships, which made him a FIDE master at just the age of seven! Two years later, he won the Under-10 title.

#He also became the youngest International Master in 2016 at the age of 10 years and 10 months.

#Praggnanandhaa started playing chess for the first time at just the age of three. His sister, Vaishali, is also a chess player.

#He had once revealed that even while he's on the phone, he prefers playing chess games, which helps him sharpen his skills in the sport.

#This victory over Magnus Carlsen made him the third Indian after Vishwanathan Anand and Pentala Harikrishna to beat the Norwegian chess master.

The youngster did not have a good start to the Airthings Masters. He had just one victory to his name, which came over Armenian Grandmaster Levon Aronian. But he rapidly made up with this impressive victory over Carlsen in 39 moves.

(The above story first appeared on LatestLY on Feb 21, 2022 01:05 PM IST. For more news and updates on politics, world, sports, entertainment and lifestyle, log on to our website latestly.com).