Djokovic overcame Berrettini's challenge in the Wimbledon final, where he defeated the Italian 6-7, 6-4, 6-4 and 6-3 to clinch his sixth Wimbledon title and 20th Grand Slam, equalling the legendary Roger Federer and Rafael Nadal. Both Nadal and Federer took to Twitter to congratulate the Serbian on this astonishing achievement. 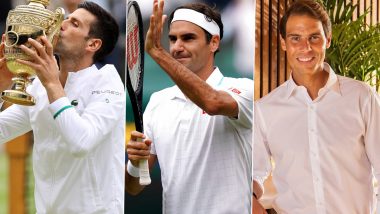 But Djokovic didn't have it easy. The match swayed to and fro but the Serbian used all his experience to upstage his Italian opponent 6-7, 6-4, 6-4 and 6-3 to clinch his sixth Wimbledon title and etch his name in the record books.

Roger Federer took to Twitter to congratulate the Serbian star, who has been phenomenal in the tournament, saying that he was 'proud to play in an era of tennis champions.'

Congrats Novak on your 20th major. I'm proud to have the opportunity to play in a special era of tennis champions. Wonderful performance, well done!

Rafael Nadal was also quick to congratulate his contemporary, who defeated him in the French Open final earlier this year. Nadal wrote that it was great that three players were tied on 20 Grand Slams.

Congrats @DjokerNole on this amazing achievement. 20 Grand Slam titles is huge and it is amazing that we are 3 players tied on this. Well done and, again, congrats to you and your team for this!@Wimbledon

Wimbledon too posted a throwback tweet of Djokovic who said that as a child, he used to make Wimbledon trophies out of the materials in his room.

"When I was a little boy, I used to make the Wimbledon trophy out of materials in my room, imagining I'd be standing here one day"

(The above story first appeared on LatestLY on Jul 12, 2021 02:59 PM IST. For more news and updates on politics, world, sports, entertainment and lifestyle, log on to our website latestly.com).