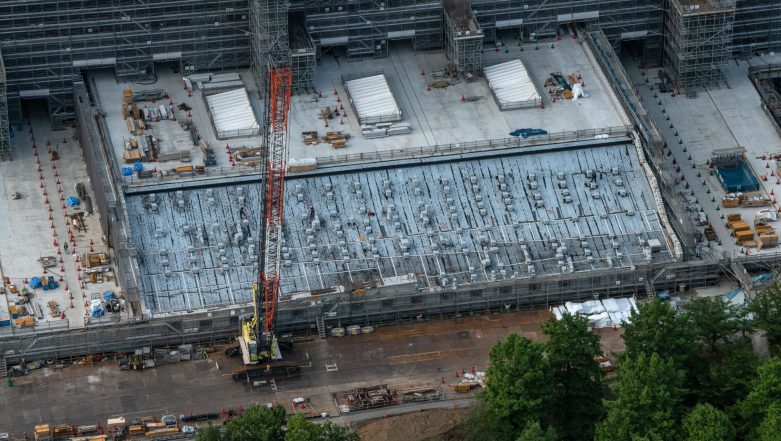 Tokyo, July 25: As Tokyo 2020 Olympics preparations enter their final stage, officials are touting the city's readiness, but activists and workers groups say speedy venue construction has had dangerous consequences. The Olympic opening ceremony is now less than a year away and more than half the new venues being built for the Games are already complete. This Fan-Made Tokyo 2020 Summer Olympics Logo Design Officially Wins The Internet Today! Check Out Photos.

"We are where we want to be," Tokyo Governor Yuriko Koike confidently told reporters earlier this month. But some argue the city has kept on schedule at the cost of the health and safety of the thousands of workers building the sites. An official tally shows there have been at least two deaths linked to Olympics construction in Tokyo.

In 2017, a 23-year-old Olympic stadium worker killed himself after clocking nearly 200 hours of overtime the month before, with the local labour office recognising his suicide as a case of death from overwork, a phenomenon known as "karoshi". The following year, a man was crushed to death between a crane and scaffolding. Fourteen people have also been injured during construction, according to official records through the end of 2018.

But while London had a near perfect construction safety record for the 2012 Games, Tokyo is still doing significantly better than other Olympic hosts.

Still, workers in Tokyo say they are being squeezed by the twin pressures of labour shortages and a tight schedule. "The work is hard," said one veteran contractor in his sixties, who works as a sub-subcontractor on a project to build the Olympic Village. He said manpower was about 40 percent short, and the pressure to stay on schedule has led to safety shortcuts. Tokyo Olympics 2020: From How to Buy Tickets to Questions over Shaun White and Michael Phelps’ Participation in Summer Games; Get All Details regarding the Upcoming Olympics.

He described days when he and his colleagues continued to work as a crane arm clutching a huge block of concrete moved overhead. They didn't move even after safety whistles were blown.

"We were too busy," he told AFP on condition of anonymity. "It's like an assembly line for cars. You have to install the hoods no matter what because those putting in the windshields are waiting next." They would only move when labour office inspectors came over. "The breaks resulted in us being forced to hurry even more for the rest of the day, only increasing the risks," he said.

Labour unions say the problems with Olympic construction reflect issues in the industry in Japan more broadly, including the widespread use of multiple subcontractors who have little power to protest poor conditions. Six-day work weeks are common, and the ageing country's labour shortage means workers are stretched thin.

One in four workers in Japan's construction industry is 60 or older, far outstripping the number of workers aged 30 or younger. Overwork is also a problem for workers in other industries, despite government efforts to address excessive hours.

The conditions have raised concern among labour activists. In May, the Building and Wood Worker's International union reported "alarming" testimony from 40 workers building the new national stadium and Olympic village. The report warned of "dangerous patterns of overwork" and alleged some workers had been forced to buy their own protective equipment.

It said workers described unsafe conditions and that half of those interviewed did not have formal contracts -- a situation not illegal in Japan but uncommon in industrialised countries.

It also accused employers of creating a "culture of fear" with workers afraid of losing their jobs if they complained or reported problems. Olympic organisers, along with the Tokyo local government and the Japan Sport Council (JSC) in charge of building the new stadium, said they are discussing the report with BWI. JSC vice president Jugo Imaizumi said he thought there had been a "misunderstanding". Robots to Welcome Visitors and Help to Transport Javelins During Tokyo Olympics 2020 in Japan.

"Many people who came back here after working elsewhere say they realised conditions here are really good," Imaizumi told AFP. Olympics worksites close at night to prevent overwork and employees have Sundays off, he added. Officials also say only a handful of complaints have been submitted to the Tokyo local government and Olympic organising committee.

But labour officials said that is merely evidence of workers' reluctance to speak up because although they can request anonymity they are required to submit their name and phone number when filing a complaint. "Their logic is that since there is no filing of complaints, there is no problem," a labour union official near Tokyo told AFP. "The system is just to establish an 'alibi' for them."