Do You Use '123456' or 'Qwerty' As Your Passwords? World's Most Hacked Passwords Released; Is Yours on the List? 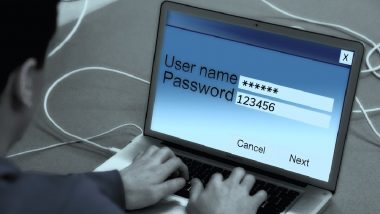 Is your password strong enough that it cannot be hacked? According to a new study, millions of people are using '123456' or 'qwerty' as their passwords. While we would have all at some point used these as our passwords, its high time we change it. The study says that these passwords are the most hacked ones as it is widely used. According to UK's National Cyber Security Center (NCSC), 23.2 million accounts that were hacked used the password '123456'. The second most used password is 123456789; the top five also includes 1111111.

Details of the analysis covering the 100,000 most commonly re-occurring passwords accessed by hackers in global breaches were taken from the site 'Have I Been Pwned' run by security expert Troy Hunt. The survey comes ahead of the NCSC's Cyber UK conference which will be held in Glasgow from on April 24 and 25. 773 Million Unique Email IDs and 21 Million Unique Passwords Leaked: Researcher.

Do you football lovers out there have passwords after your favourite team? Then you may in trouble, as some of the most guessable passwords include 'Liverpool' followed by 'Chelsea'. Meanwhile, for music junkies, it is 'Blink-182'. Names which are commonly used as passwords include 'Ashley', followed by 'Michael', 'Daniel', 'Jessica' and 'Charlie'. Dr Ian Levy, technical director of the NCSC says, "People who use well-known words or names for a password put themselves people at risk of being hacked. Nobody should protect sensitive data with something that can be guessed, like their first name, local football team or favourite band." The Most Popular Passwords of 2017 Are Surprisingly Easy, Know if Yours is on The List.

Here are 20 most used passwords

Following the cyber-survey, NCSC has advised people to create a password by adding three random words that they will not forget. NCSC also found out that 42% of people lost money in online fraud and only 15% were sure that they knew enough to be safe online. Out of the people quizzed, only fewer than half used a difficult password for their main email account. Security expert Troy Hunt said having a strong password was the "single biggest control" people had to protect themselves online. He said making these details public should help people change their passwords and use better ones.

(The above story first appeared on LatestLY on Apr 21, 2019 01:24 PM IST. For more news and updates on politics, world, sports, entertainment and lifestyle, log on to our website latestly.com).