Infinix India will launch the Smart 6 smartphone in the country on April 27, 2022. The Hong Kong-based brand took to Twitter to announce the development, and confirm it would be exclusively sold via Flipkart. 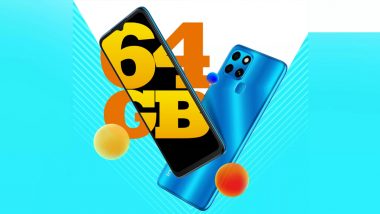 Infinix India will launch the Smart 6 smartphone in the country on April 27, 2022. The Hong Kong-based brand took to Twitter to announce the development, and confirm it would be exclusively sold via Flipkart. A microsite is already live on the e-commerce marketplace revealing key details of the upcoming smartphone ahead of its launch. Infinix InBook X1 Series Launched in India From Rs 35,999; First Sale on December 15, 2021.

Based on the details revealed via teasers, the Infinix Smart 6 will sport a 6.6-inch HD+ notched display with 500 nits and a screen-to-body ratio of 89 per cent. In terms of security, there will be a fingerprint sensor and face unlock feature. The forthcoming Infinix Smart 6 will get the industry's first antibacterial material back design with silver ion coating.

As far as pricing details are concerned, the upcoming Infinix Smart 6 will be a sub-Rs 10,000 offering. The phone is globally priced at $120 which is around Rs 9000. We can expect it to be priced at a similar price point in India.

Infinix has confirmed via a tweet that the Infinix Smart 6 will launch in India on April 27. There is also a landing page on Flipkart that reveals more details about this upcoming smartphone. It is globally priced at $120 (roughly Rs. 9,000).

The company will offer the device an improved storage capacity of 64GB. The handset is said to pack up to 4GB of RAM. it is likely to come with up to 2GB + 2GB virtual RAM. It will run on the Android 11 (Go edition)-based XOS 7.6. Under the hood, it could get a Unisoc SC9863A SoC. For photos and videos, the device is likely to get an 8MP dual rear camera setup and a 5MP selfie shooter upfront. It will pack a 5,000mAh battery with 10W charging.

(The above story first appeared on LatestLY on Apr 26, 2022 10:55 PM IST. For more news and updates on politics, world, sports, entertainment and lifestyle, log on to our website latestly.com).