Meta-owned WhatsApp on Tuesday said that it has banned 2,079,000 accounts in India in the month of December in compliance with the new IT Rules, 2021. 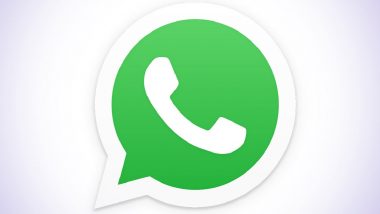 New Delhi: Meta-owned WhatsApp on Tuesday said that it has banned 2,079,000 accounts in India in the month of December in compliance with the new IT Rules, 2021. The company said that it also received 528 grievance reports in the same month from the country and took action on 24 of those. WhatsApp Group Admins Will Soon Be Able To Delete Messages for Other Members.

The company said that data shared highlights the number of Indian accounts banned by WhatsApp between December 1 to December 31 using the aforementioned abuse detection approach, which also includes action taken in furtherance to negative feedback received from users via our "Report" feature.

"WhatsApp is an industry leader in preventing abuse, among end-to-end encrypted messaging services," the spokesperson said. "Over the years, we have consistently invested in Artificial Intelligence and other state of the art technology, data scientists and experts, and in processes, in order to keep our users safe on our platform," it added.

Meta also received 534 reports for Facebook through the Indian grievance mechanism from December 1 to December 31, and responded to all of these reports, spanning from fake profiles to harassment/abusive content and hacked accounts. Of the other 95 reports where the specialised review was needed on Facebook, Meta took action on 28 of those.

(The above story first appeared on LatestLY on Feb 02, 2022 08:46 AM IST. For more news and updates on politics, world, sports, entertainment and lifestyle, log on to our website latestly.com).