Microsoft has announced a new lineup of 30 games, 27 of which will be included with Xbox Game Pass. The new Game Pass titles, announced during Microsoft and Bethesda's joint E3 conference on Sunday, 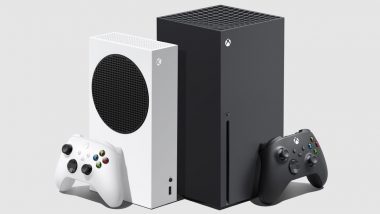 New Delhi: Microsoft has announced a new lineup of 30 games, 27 of which will be included with Xbox Game Pass. The new Game Pass titles, announced during Microsoft and Bethesda's joint E3 conference on Sunday, will have 11 new games available on the subscription service via Xbox and PC. Microsoft To Bring Cortana-Enabled Voice Capabilities to Its Outlook Mobile App.

You'll see many games this holiday, including Forza Horizon 5, which will boast DirectX Raytracing on both Xbox Series X and S, and Battlefield 2042, which will run at 60fps while supporting 128 players on Xbox Series X|S.

😯 6 huge game releases in 6 months, all Day One on XGP

"Some games launching next year from our first party studios and partners, such as Starfield, Redfall, and S.T.A.L.K.E.R. 2 require the speed, performance, and technology of Xbox Series X|S," Microsoft said in a statement. 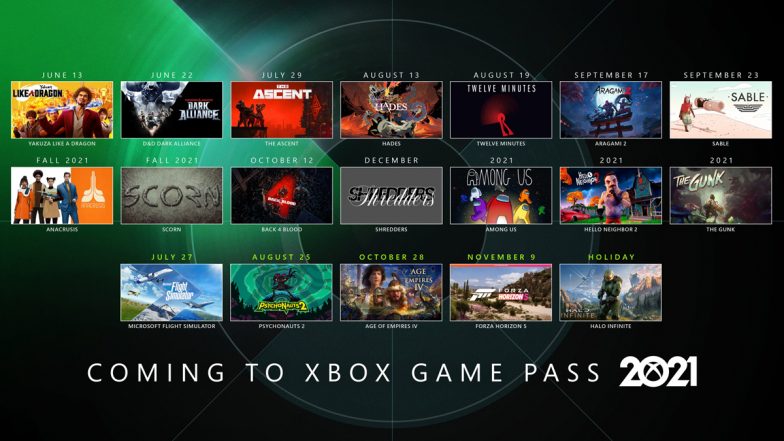 Microsoft Flight Simulator will take flight on the Xbox Series X|S on July 27 and will be included with Xbox Game Pass. The popular multi-player ‘Among Us' game is also coming to Xbox Series X|S via Game Pass later this year. In addition, Yakuza: Like A Dragon has also been added to Xbox Game Pass, which is now available. PC players will also have access to Fallout: New Vegas starting now, the company said.

The company announced a stellar line-up of AAA titles, including a number of must-play titles from Xbox Games Studios and Bethesda that will be available with Xbox Game Pass on the day they release. Microsoft said that its Flight Simulator will also come to console through Xbox Cloud Gaming. Microsoft also announced a brand-new title ‘Redfall' which is a co-op shooter. The game is being developed by Arkane's studio in Austin, Texas, and is set for launch in 2022.

(The above story first appeared on LatestLY on Jun 14, 2021 10:59 AM IST. For more news and updates on politics, world, sports, entertainment and lifestyle, log on to our website latestly.com).