Motorola is rumoured to launch the Edge 30 smartphone soon. Ahead of its launch, key specifications of the handset have been leaked online by a popular tipster. 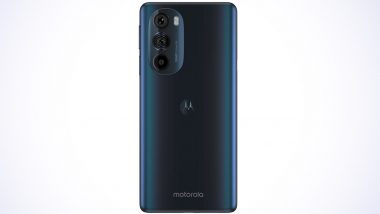 According to Brar, Motorola Edge 30 is likely to flaunt a 6.55-inch FHD+ pOLED display with a refresh rate of 144Hz. It might come powered by a Qualcomm Snapdragon 778G+ processor coupled with up to 8GB of RAM. For optics, the handset could get a triple rear camera setup comprising a 50MP primary lens, a 50MP ultra-wide-angle lens and a 2MP depth snapper. Upfront, there could be a 32MP selfie camera.

Motorola's upcoming offering is likely to pack a 4,020mAh battery with 30W fast charging support. The device might run on Android 12 based on My UX OS.

(The above story first appeared on LatestLY on Apr 04, 2022 03:57 PM IST. For more news and updates on politics, world, sports, entertainment and lifestyle, log on to our website latestly.com).