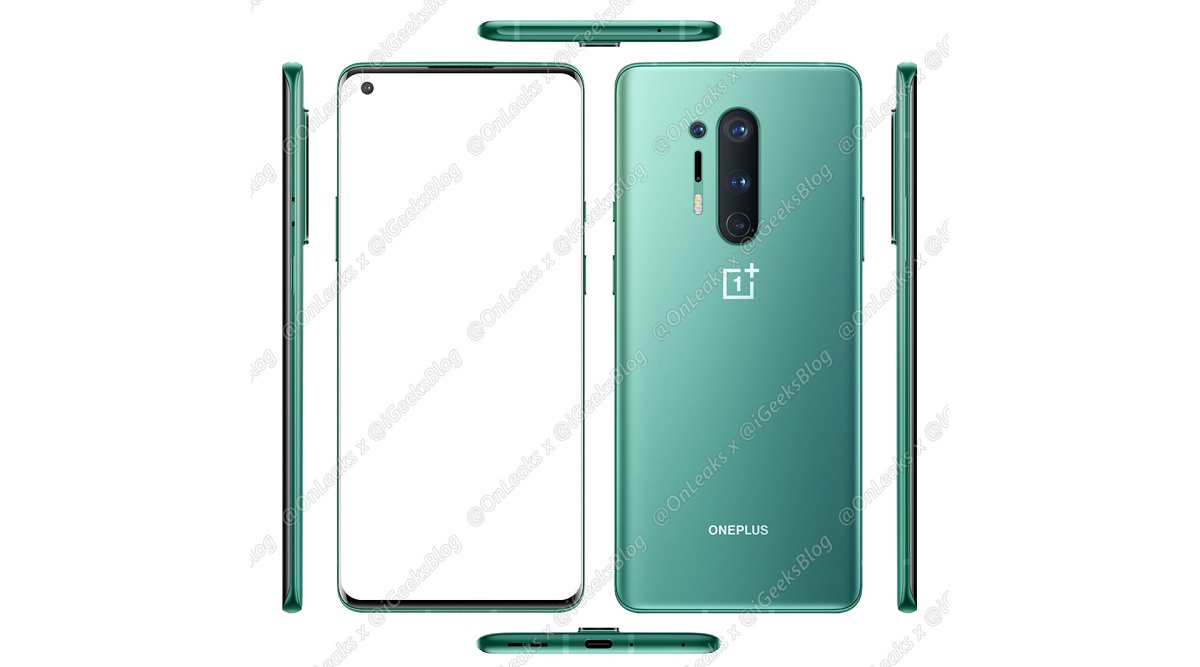 OnePlus, the Chinese smartphone maker will be launching its next-in flagship device - OnePlus 8 series soon. The phone maker has been working on the device for quite some time now and we have already seen plenty of leaks about the OnePlus 8 series. Earlier this week, the alleged specifications of the OnePlus 8 series were leaked online revealing the RAM, storage configurations and battery details. It is also rumoured that the OnePlus 8 flagship series could be launch by April 14 or April 15. Coronavirus Pandemic: OnePlus Shut Stores & Orders on Hold As India Faces Nationwide Lockdown.

Now, a new set of press render reportedly has been leaked online, courtesy of iGeeksBlog. Moreover, the tipster is calling the images as official press renders of the upcoming OnePlus 8 Pro. Going by the leaked render, it shows the handset in a new green colour featuring four rear cameras and a punch-hole display with a cutout at the top on the left side.

The volume rockers are positioned on the left-hand side whereas the power button and alert switch is seen on the right side, similar to what we have seen on the predecessor. The image also reveals the Type-C port along with speaker grille at the bottom. However, the company is likely to disappoint the customers as it might ditch the 3.5mm headphone jack. Notably, this is not the first time we have seen leaked renders of OnePlus 8 Pro lately.

Another popular leakster - Ishan Agarwal tipped that OnePlus 8 Pro smartphone will sport 120Hz display, Snapdragon 865 SoC, up to 12GB of RAM, up to 256GB of storage, 4510 mAh battery with wireless charging. He also mentioned that the handset will pack a quad rear camera comprising of a 48MP primary shooter along with 48MP secondary shooter. The other two sensors will be an 8MP lens along with a 5MP snapper. Moreover, the company is also expected to offer IP68 certification to the OnePlus 8 Pro.