OnePlus Nord CE 5G smartphone will be launched in the country tomorrow at 7 pm IST at the OnePlus Summer Launch event. Prices of the Nord Cord Edition 5G phone will be revealed at the event alongside the OnePlus TV U1S. 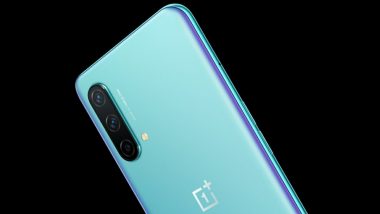 OnePlus will host its OnePlus Summer Launch event tomorrow in India. The Chinese phone manufacturer will launch its second Nord smartphone alongside the OnePlus TV U1S at the event that is slated to begin at 7 pm IST. The phone brand has been teasing the upcoming Nord CE 5G for quite some time now confirming some of the key specifications of its launch. As the new Nord phone is set to make its debut, the original Nord phone is now no longer available for online sale in the country.

The OnePlus Nord Core Edition 5G is expected to be priced somewhere around Rs 20,000. We might see some similar pricing as the original OnePlus Nord, which gets a starting price of Rs 24,999. While pre-orders will begin from June 11, the OnePlus Nord CE 5G will be available for the first open sale starting June 16, 2021.

The new OnePlus Nord CE 5G is likely to be offered in three shades. While the first two shades will be Void and Charcoal Ink, the third colour has been teased with an iridescent silver shade. If the market reports are to be believed, the phone could be offered in two variants - 6GB + 64GB and 8GB + 128GB versions. OnePlus Nord CE 5G To Get 4,500mAh Battery With 30T Plus Warp Charging Support.

Set your reminders and alarms for this one ⏰

In terms of specifications, the phone will sport a 6.43-inch FHD+ AMOLED display with a 90Hz refresh rate. It will draw power from a Qualcomm Snapdragon 750G SoC paired which will be paired up to 8GB of RAM and 128GB of onboard storage. It is likely to run on Android 11-based OxygenOS custom skin out of the box. It is tipped to pack a 4,500mAh battery with 30W fast-charging support. The handset is said to feature a quad rear camera setup which will include a 64MP OmniVision sensor assisted by an 8MP ultra-wide lens and a 2MP depth unit.

(The above story first appeared on LatestLY on Jun 09, 2021 11:05 PM IST. For more news and updates on politics, world, sports, entertainment and lifestyle, log on to our website latestly.com).