Poco X2 Smartphone will be launched in India tomorrow at an event in New Delhi. The company will be officially announcing the prices for its second Poco smartphone which is likely to start from Rs 18,999. 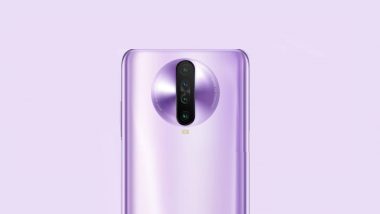 Poco India is all set to launch its second smartphone, Poco X2, tomorrow in India. Ahead of the official launch, the company has officially released a new teaser video of the phone, giving a clear glimpse to the fans. The recently released footage reveals Poco X2's silhouette, sharing some resemblance with the Redmi K30 model. Previously, some rumours surfaced on the internet claiming that the Poco X2 will be rebranded version of Redmi K30 4G variant, that will be built for the Indian customers. Galaxy Z Flip First Hands-On Video Gives Glimpse of Samsung’s Next Foldable Phone; Watch Video.

The company will be launching the smartphone in the Indian market on February 4. The launch event is slated to commence at 12 pm IST onwards. When launched, the phone will be retailed exclusively via Flipkart. Also, the company has been teasing a higher refresh rate of the phone which will be 120Hz. The smartphone will also pack a 27W charging capacity; however, there is no official confirmation for a fast charger as of now. Poco X2 Launching in India on February 4 With High Refresh Rate Display: Report.

On the specification front, the phone will get an edge-to-edge display with a 120Hz refresh rate. The smartphone could pack a 6.67-inch FHD+ display with 20:9 aspect ratio protected by Corning Gorilla Glass 5. Under the hood, the smartphone is likely to be powered by Qualcomm Snapdragon 730G chipset that might be mated with up to 8GB of RAM and up to 256GB of internal space. Poco X2 India Prices Likely To Start From Rs 18,999; To Be Launched On February 4.

Poco X2's recent Geekbench listing revealed that the phone would come equipped with an octa-core chipset, Android 10 OS, 6GB of RAM, a 3.5mm headphone jack, USB Type-C port and much more. As far as the prices are concerned, there were reports in the market claiming that the phone will be launched with a starting price of Rs 18,999 for the 6GB + 64GB variant.

(The above story first appeared on LatestLY on Feb 03, 2020 10:00 AM IST. For more news and updates on politics, world, sports, entertainment and lifestyle, log on to our website latestly.com).