Longest Partial Lunar Eclipse of The Century to Occur on November 18-19; Know Details Regarding Celestial Event

The longest partial lunar eclipse of the century with a duration of 3 hours 28 minutes and 23 seconds will occur overnight on November 18, 19. It will be visible to people across several regions including North, South America, Australia among others. 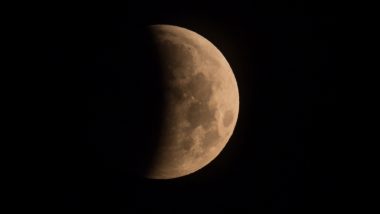 New Delhi, November 7: A celestial event is due to take place around mid-November that is highly awaited by space enthusiasts, researchers as well as astrologers alike. The longest partial lunar eclipse of the century will take place on November 18 and 19. The lunar eclipse is expected to last for 3 hours, 28 minutes and 23 seconds, marking the longest duration of such partial eclipse during this century. It will be visible to people in several regions across the globe, according to NASA. Giant Moon Escapes Festival in China! Check Out the Viral Video of the Moon Rolling Down the Street as Staff Tries to Catch it.

The upcoming partial lunar eclipse, or at least its part, will be visible from North and South America, Eastern Asia, Australia and the Pacific Region. Accoring to a report by NDTV, it will be visible to people in Eastern States of India including Assam and Arunchal Pradesh. "Weather permitting, the eclipse will be visible from any location where the Moon appears above the horizon during the eclipse. Depending on your time zone, it'll occur earlier or later in the evening for you," said NASA . Gigantic Moon Seen Crossing The Sun in North Pole in Arctic Region Between Canada And Russia For 30 Seconds? The Viral Video is Fake.

(The above story first appeared on LatestLY on Nov 08, 2021 08:38 PM IST. For more news and updates on politics, world, sports, entertainment and lifestyle, log on to our website latestly.com).