Lyrids Meteor Shower 2021 Dates: How and When to Watch the Shooting Stars? All You Need to Know About the Celestial Event

If you are wondering how and when to watch the shooting stars? Worry not; you reached the right place. This article brings you Lyrids Meteor Shower 2021 dates, time, and more for you to gear up for the cosmic occurrence. 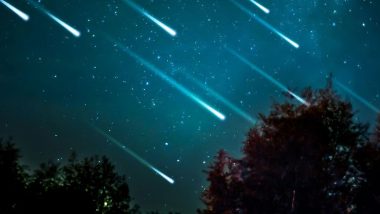 Each month, there are some interesting celestial events scheduled on different calendar dates. As we are in the month of another month, skywatchers prepare themselves for one of the oldest cosmic dance of the year—the Lyrids Meteor Shower. The annual shower is set to make an appearance in April. At its peak, the meteor shower will only produce about 20 shooting stars per hour. The meteor shower will be best viewed in the Northern Hemisphere on a clear night. If you are wondering how and when to watch the shooting stars? Stress not; you reached the right place. This article brings you Lyrids Meteor Shower 2021 dates, time, and more for you to gear up for the cosmic occurrence.

What is Lyrids Meteor Shower?

The Lyrids are named after Lyra, the constellation the shooting stars appear to radiate from every year in late April. According to scientists, the Lyrids are one of the weaker annual meteor showers visible from Earth. The event is also unpredictable; however, the dates are anticipated. Lyrids usually produce no more than 20 shooting stars per hour, but spectators are treated to incredible surges of up to 100 meteors per hour on rare occasions.

The Lyrids are the first major meteor shower of the spring, which makes it even more special. The Lyrids meteor shower will start from April 16 and will be visible till April 25. However, the cosmic dance will pick up steam beginning on April 19, and peak visibility is expected to occur on April 22. The shooting stars show will be aits brightest between the moonset and dawn.

When and Where to Watch Lyrids Meteor Shower?

The meteor shower will be best viewed in the Northern Hemisphere and on a clear night and away from city lights. The early morning hours on April 22 will likely offer the best chance to spot some of the Lyrid meteor showers because of the darker sky. You will also be able to watch the live streaming of the Lyrid meteor shower on a popular scientific YouTube channel, the details of which are yet to be revealed. Celestial Event Calendar of 2021.

So, are you ready to watch the spring’s most-awaited celestial occurrence? Well, we know we are! With the ongoing pandemic making the situation worrisome, celestial events such as the Lyrids meteor shower come as hopeful and pleasant treat in the night sky.

(The above story first appeared on LatestLY on Mar 31, 2021 06:21 PM IST. For more news and updates on politics, world, sports, entertainment and lifestyle, log on to our website latestly.com).