What is Earthquake? What Are The Causes and Effects of Seismic Waves? Know Everything About This Natural Occurrence

We know the basics that an earth's plates move during an earthquake causing the ground to shake. But what exactly is an earthquake and what are the causes? What makes the ground shake? In this article, we tell you all about the seismic waves and this natural disaster. 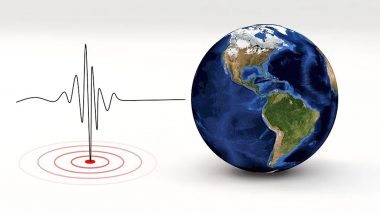 In the midst of coronavirus pandemic, we are also reading up about frequent earthquakes in different parts of the world. We know the basics that an earth's plates move during an earthquake causing the ground to shake. But what exactly is an earthquake and what are the causes? What makes the ground shake? In this article, we tell you all about the seismic waves and this natural disaster occurrence. Earthquakes: High-Intensity Quake Measuring 6.3 on Richter Scale Hits Indonesia & Another Quake of 6.1 Magnitude Strikes Singapore.

What is an Earthquake?

What Causes an Earthquake?

This is the most common question when it comes to earthquakes. What causes the ground to shake? Earthquakes occur in areas which coincide with the tectonic plates. A tectonic plate is part of the lithosphere, a massive slab of solid rock. The size of these plates vary, they can be a few hundred to thousands of kilometres wide. These plates change over time, like Earth's other surfaces. A lot of seismic activity is usually reported in regions of these belts of tectonic plates. The plate boundaries are rough and they get stuck while the plates move. When the plate moves enough, the edges move with a force causing an earthquake. Earthquakes are natural occurrence with the sudden release of energy within rocks of the earth's crust. The release of an elastic strain can produce major disturbance on the surface. This is when the seismic waves shake through the ground and reach above.

What Are the Effects of Earthquakes?

Shaking and rupturing of the ground are the major effects of earthquakes which result in falling off buildings and other structures on the ground. If the epicentre of a quake is in the ocean surface it can trigger tsunami waves. They can cause severe storms, volcanic activity and landslides too. It depends on what type of earthquake hits. First Direct Seismic Measurements Reveal a Geologically Active Mars.

There are different types of earthquakes that depend on the causes behind them. The most common and damaging ones are tectonic quakes, caused by the movement of tectonic plates. Other types of earthquakes are manmade induced quakes, which are caused by human activity like tunnel construction, filling reservoirs and implementing geothermal projects. Volcanic earthquakes are ones that take place due to a volcano outburst. The movement is because of the pressure changes around the rock near the magma beneath the surface.

(The above story first appeared on LatestLY on Jul 07, 2020 01:49 PM IST. For more news and updates on politics, world, sports, entertainment and lifestyle, log on to our website latestly.com).