Australian Deputy Prime Minister Barnaby Joyce has been fined A$200 ($151) for failing to wear a face mask inside a petrol station in New South Wales (NSW) state. 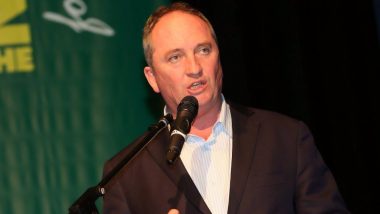 Canberra, June 29: Australian Deputy Prime Minister Barnaby Joyce has been fined A$200 ($151) for failing to wear a face mask inside a petrol station in New South Wales (NSW) state.

Joyce, also the leader of the National Party of Australia, confirmed the incident of breaching coronavirus restrictions,reports Xinhua news agency.

"I went into the Caltex service station. I was going to the airport, fuelled the car up with fuel, went in, 30 seconds later, A$200 it cost me, because I didn't wear one of these (masks)," he told Sky News Australia on Tuesday.  Australia: Sydney to Enter Week-Long Lockdown to Curb COVID-19 Delta Variant Spread

NSW police said they were called to the petrol station by a member of the public and issued the fine to a 54-year-old male after reviewing the security camera footage.

"That person was apologetic and cooperated with police being firm and fair," deputy commissioner Gary Worboys told reporters.

"Police are rostered 24/7 right across the state and they will take action, and certainly the incident at Armidale is clear evidence that police will investigate and take action."

It comes a week after Joyce was returned as the Deputy Prime Minister after a successful leadership challenge against former Nationals leader Michael McCormack.

The governing coalition government in Australia is formed by the Liberal Party and the National Party, with the leader of the later serving as the Deputy Prime Minister.

Joyce previously served as the Deputy Prime Minister from 2016 to 2018 when he resigned after being accused of sexual harassment, an allegation he strongly denied.

(The above story first appeared on LatestLY on Jun 29, 2021 03:48 PM IST. For more news and updates on politics, world, sports, entertainment and lifestyle, log on to our website latestly.com).