The Confederation of All India Traders (CAIT) has hailed and appreciated the agreement reached out between members of Group of Seven (G7) at their meeting on Saturday where the world's richest nations agreed to close cross-border tax loopholes used by some of the biggest multinational companies and have decided to back a minimum global corporation tax rate of at least 15 per cent. 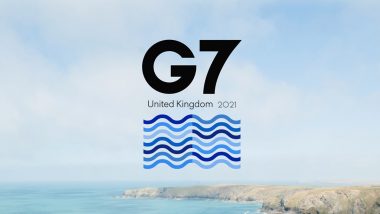 New Delhi, June 6: The Confederation of All India Traders (CAIT) has hailed and appreciated the agreement reached out between members of Group of Seven (G7) at their meeting on Saturday where the world's richest nations agreed to close cross-border tax loopholes used by some of the biggest multinational companies and have decided to back a minimum global corporation tax rate of at least 15 per cent.

This move, though at a very preliminary stage and if implemented, will certainly put checks and balances on the business practices of multinational companies and could be termed as a most progressive step which will bring a diagonal reform in international taxation system having vital bearings on the working of large number of multinational companies who are devising ways and means to avoid the tax liability to the exchequer of consuming countries, CAIT said.  Flipkart Restructured Biz Model to Exercise Control over Inventory, Retail Prices, Alleges CAIT

However, the rationale of such levy is justified only when fair amount of such tax goes to the country where the goods or the services have been consumed, it added.

CAIT said that though the finer details of the agreement will be chalked out later but in the first instance, this landmark deal will overhaul international tax laws, unveiling a broad agreement that aims to stop large multinational companies from seeking out tax havens and force them to pay more of their income to governments of the countries where they operate their businesses.

Subject to further discussions, it will certainly boost revenue of countries like India, which is the largest consumer based economy over the globe.

CAIT said that the USP of such a deal is that multinational corporations will no longer be able to shy away from their fiscal obligations by cunningly transferring their profits to countries with opaque or beneficial tax structures for them.

It said that multinationals will pay the tax as may be finally agreed in the country where they sell their goods or services. Increasingly, income from intangible sources such as drug patents, software and royalties on intellectual property has migrated to these jurisdictions, allowing companies to avoid paying higher taxes in their traditional home countries.

However, fixing a global minimum corporate tax rate of just 15 per cent is far too low, it said, adding that it will do little to end the damaging race to the bottom on corporate tax and curtail the widespread use of tax havens.

CAIT said the underlying principle behind this agreement is consumption-based tax and not origin-based tax.

From the contents of decisions taken at the G7 Meeting it was "clear" that large digital firms should pay an "appropriate level of tax where they operate so countries can raise revenue and invest in their public services" or in simple words, there are two issues to be decided i.e. the first focuses on taxing part of multinationals' profits in the countries where they sell their services and goods, while the second would establish a minimum rate for corporate tax.

CAIT Legal adviser and leading tax advocate Sushil Verma opined that the agreement if finally implemented, whenever, will impose an additional tax on some of the largest multinational companies, potentially forcing technology giants like Amazon, Facebook and Google as well as other big global businesses to pay taxes to countries based on where their goods or services are sold, regardless of whether they have a physical presence in that nation.

With G7 countries which include France, Germany, Italy, Japan, the UK, the US, and Canada, reaching a unanimous agreement to a global minimum tax rate of at least 15 per cent, though the qualifying amount yet to be determined through rules that may take another six months before these are finalised after this proposal is put to G20 in its July 21 meeting.

The US has proposed to extend the fiscal reform beyond the tech sector to cover the world's largest 100 companies; not tech giants alone but including pharma etc.

Verma said that undoubtedly while consensus on a minimum tax rate might have been relatively easy to reach, things might get more complex when it comes to dividing tax revenues between countries depending on where firms sell their goods and services - what he simply call Point of Sales on international level but 139 countries in the world would get a new right of taxation over a small share of the global profits of the largest and most profitable multinational corporations and according to their calculation, a minimum rate of 15 per cent would put approximately 50 billion euros extra per year in the coffers of EU countries. A 25 percent rate would bring approximately 200 billion euros.

Verma further said the companies that are mostly affected are those that book profits in countries with low effective tax rates. More importantly, such an agreement could reshape tax obligations of multinational corporations and this, they are not likely to take lying down. The giant economies like the US will have to work with other countries to prevent multinational corporations seeking lower tax obligations in the most tax competitive world simply moving elsewhere; keeping in view the hard reality that corporate tax rates across the globe have fallen dramatically.

"However, we need to wait and watch the folow up exercise of this agreement and the subsequent rules for its implementation," he said.

(The above story first appeared on LatestLY on Jun 06, 2021 07:28 PM IST. For more news and updates on politics, world, sports, entertainment and lifestyle, log on to our website latestly.com).