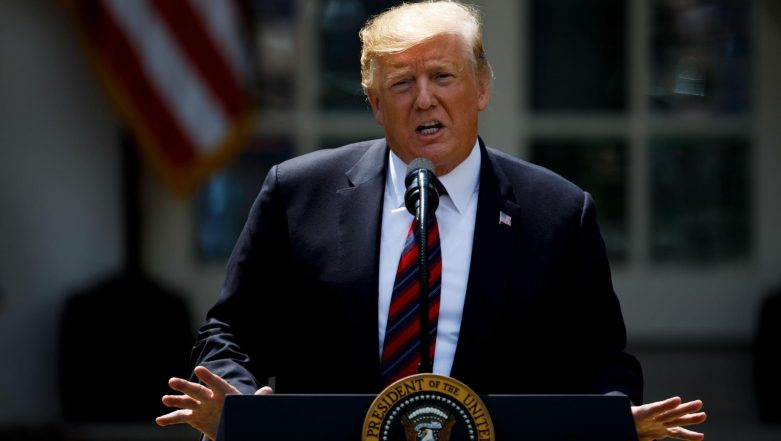 Washington, July 16: US President Donald Trump has said that the tariffs imposed by his administration were taking a toll on China's economy, causing the Asian giant's growth rate to slow. "China's 2nd Quarter growth is the slowest it has been in more than 27 years. The US tariffs are having a major effect on companies wanting to leave China for non-tariffed countries," Efe news quoted the US President as saying on Twitter on Monday. Trump said the tariffs were not only influencing corporations' decisions on where to set up operations, but also putting pressure on Beijing to reach a trade agreement with Washington.

"Thousands of companies are leaving. This is why China wants to make a deal with the U.S., and wishes it had not broken the original deal in the first place," Trump said. The US leader touted the revenue generated by the tariffs imposed on imported Chinese goods. "In the meantime, we are receiving billions of dollars in tariffs from China, with possibly much more to come. These tariffs are paid for by China devaluing & pumping, not by the U.S. taxpayer!" Trump tweeted. U.S. Tariffs on China: Donald Trump Threatens Fresh Tariffs Worth $200 Billion.

China’s 2nd Quarter growth is the slowest it has been in more than 27 years. The United States Tariffs are having a major effect on companies wanting to leave China for non-tariffed countries. Thousands of companies are leaving. This is why China wants to make a deal....

The US President's views on tariffs run counter to those of economists, who argue that the trade levies are, in effect, a tax on consumers because they result in higher prices. The Trump administration, for its part, contends that tariffs can be used as an effective policy tool.

Trump's tweets were posted hours after the Chinese government said the gross domestic product (GDP) grew 6.3 per cent in the first half of 2019, or 0.50 percentage points less than in the same period last year.

The National Bureau of Statistics said Monday that the GDP grew only 6.2 per cent year-on-year in the second quarter, marking the weakest performance in 27 years and confirming analysts' predictions that the ongoing trade war with the US would cause a slump in domestic demand. China's GDP grew 6.4 per cent in the first quarter.

In late June, Trump and his Chinese counterpart, Xi Jinping, met on the sidelines of the G20 Summit in Japan and agreed to a truce in the trade war, with Washington holding off on imposing new tariffs on China and allowing US companies to sell products to tech giant Huawei.

The two leaders agreed during their meeting in Osaka to resume trade negotiations amid Washington's decision to not slap tariffs on all Chinese imports. In May, Trump imposed a 25 per cent tariff on Chinese imports worth $200 billion in response to the lack of progress in reaching a trade deal with Beijing. China, for its part, retaliated by slapping tariffs on US imports worth $60 billion.

Trump later threatened to impose tariffs ranging from 10 per cent to 25 per cent on another $325 billion of Chinese imports, causing concern in financial markets and the business community due to the possible effect on consumer spending, which accounts for about two-thirds of US economic activity.

While additional tariffs are off the table for now, the US will maintain the tariffs imposed on a total of $250 billion in Chinese goods, while Beijing will continue to slap tariffs on US imports totalling $110 billion.

In 2018, the US posted a trade deficit of $419 billion with China due, largely, to the fact that US exports to Asia's largest economy totalled just $120 billion, while American imports from China reached $540 billion.